We left Stock Island in the morning to move to the Key West Marina, Galleon.  Our new friend and slip neighbor, Darrin, came over to help us with our lines as we cast off.  We pulled out of the dock.   The wind was ornery and tried to push us back in.  John was afraid if he kept going forward the bow may swing starboard (right) and hit the boat next to us so he gave reverse a punch to clear it.  We cleared that boat but now were moving in reverse and headed towards the boats on the opposite side.  The bow, where I stood, swung port (left) and was on a collision course with the bow of a slipped boat.  That owner flew up to his bow and I pushed with all of my might off of his bow pulpit as he pushed with all of his might off of ours.  I felt his breath and he heard my heart racing.

The construction workers stopped working to watch.  It was quiet.  Every boat owner popped up or over to watch, or ran to the fronts or sterns of their boats if they were in our trajectory.  The first guy and I avoided boat contact, barely.  Echoes was now perpendicular to the boats opposite to where we slipped and was still drifting backwards.  The next boat was a dive boat with two enormous engines coming along the side of us.  A man pushed us off as best he could as I pushed off the piling that boat was tied to.  We very lightly scraped against one of the propellers.  We continue to drift back into a third boat.  This was big catamaran with a dinghy lifted on its stern.  That owner and his friend pushed our stern and I was at the bow trying with whatever strength was left in me to remove the pontoon of his dinghy that had wedged itself into our bow pulpit.  It made a horrendous squeeeeeak as it rubbed when I and gravity forced it out.   The owner swore loudly and sailorly and commented directly at our personas.  He made long observations about our boating abilities and intellectual levels.  He was furious.  John kept his cool and apologized, reassured him that we had insurance and that we would take care of any damage if there was any.  He told him we would hail him on the VHF and give him our information once we were settled.

John got the boat under control and we proceeded to leave.  He cracked jokes to everyone on the way out.  Like, I hope you enjoyed the show!  I wish I had a pet monkey with a red fez and tin cup to send around for tips.  I checked in with boat owner one and two, whom I knew rather intimately, and they said they were just fine and good luck.  We hailed the catamaran on VHF many times but he never answered.  Later, John called our friend Darrin and had him go over and give him our number.  Also, when you go into a marina you sign pages of wavers so he knew where to find us.  But, we never heard from him.  We left with no damage to their boats but plenty to my nerves.

It is just about an hour to motor between the two marinas.  It was a quiet hour with both of us trying to reconstruct what happened and what we had learned.  It was a new “experience.”  As usual, we had both studied the charts into Key West because two people’s heads are better than one.  But I did not look up the next marina map on the internet as John had.  This was mistake number nine of the day.  We hailed the marina and asked for dock assistance.  We turned the corner into the marina and it was the first time I heard any excitement in John’s voice that day.  Holy Shit! he said,  Look at the size of these fairways!  There was a labyrinth of yachts, and I do mean yachts, that twisted and turned with extremely narrow water in between to navigate.  I almost fainted.  The marina put little letter stickers on the outside pilings, A, B etc, and then numbers that go down the dock that you can’t see because you haven’t turned yet.  I was at the bow trying to help find our slip and John shouted, It should be down there but I don’t see it.  And we don’t see anyone there to assist us.  We pass it.  A dock handler shouts over that we’ve missed it.  It is behind us. 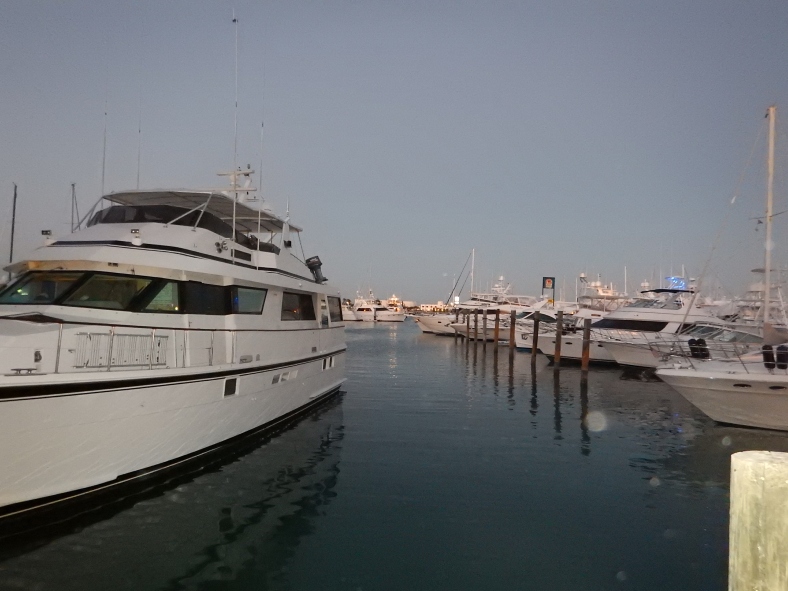 We are packed in between bee-on-chee yachts of gleaming white monstrosity.  There are no cul-de-sacs at the end of these fingers, just more yachts.  John had to spin our 42 foot boat around in a fairway of maybe, maybe 40 feet, along the side of fancy yachts, in the mean wind.  It is like spinning a basketball on a pin head.  By now our dock handler has found us and it standing on the dock to watch the pirouette of a lifetime or to push for as little damage as possible to other boats.  John spun Echoes like a pro and the bow came over the dock for her to grab and assist the spin.  I stood there with pleading eyes and a line ready to toss thinking, Please, please let us tie off here.  I hadn’t uttered a sound but she said, No darlin.  Don’t hand me that line.  Every slip is spoken for and yours is down there.  She points and I still don’t see our space.  That was because after a sharp left turn (try that with 42 feet) at the end of the finger was our space after a sharp right turn.  We couldn’t see the space because a fifty five foot shiny sailboat was docked next to it with its bow stuck way out in the fairway blocking it.  John thread both of those needles and with a light and utterly unavoidable bump on the dock edged his way to our slip.  I tossed the line to the handler and completely missed her.  Bravo!  She had to lay on the dock to hurriedly retrieve it out of the water.  She tied us off and we were in.

We secured the boat and I immediately asked her, How in darnation (something like that) does one back out of this slip?  She laughed and said, If the wind is right a dock handler will help man handle the bow of the boat to help spin the ass end while the captain backs out.  Sometimes, we have to tie several lines from your boat to cleats to assist in the spin.  Other times, we have to hop along the boats and push you off.  This does not settle well with me.  She went off on her business and John and I checked out the damage from the Stock Island exit extraordinaire. We are relieved to find just a few scuff marks that are no big deal.  They make the boat look sexy.

John’s brain was still working.  He noticed a dock space open just behind us.  Hey, he said,  Let’s ask the dock master if we can switch slip assignments before that boat arrives.  We can hand line our boat down the dock to the opposite space.  Then we will be stern in and will be able to pull out going forward rather than backward.  You are a genius!  I yelled.  So we arranged it and asked for assistance.  A new dock handler came to help.  John was to stay on the boat and helm.  The dock handler asked me which line I wanted to handle.  You’re the boss, I said.  Whatever you think makes the most sense.  He said, OK.  You hold the mid ship line and I will hold the stern line and we will pull her back.  He would release the bow line and run back to the stern.  I held the mid ship line.  He released the bow and it immediately swung out with the grouchy wind pushing it.  He groaned and said, Whoaaa.  Change of plans.  You’re on bow.  I ran over and grabbed it and he ran back to stern.  It was like holding on to a twenty two thousand pound bull charging off in the opposite direction.  I immediately leaned way back, squatted down to inches off the dock and dug my heals in.  The dock handler yelled, Sorry.  You OK?  Got it?  There was nothing anyone could do.  Just keep going!  I yelled back.  I had to squat crab walk as the boat moved back and lost about a foot of line each time I did.  Eventually, we got there.  I had no idea I had that much strength in me.  I paid for it for the next five days with a half of a bottle of Aleve.

Once the boat was secured I went into the cabin and cried.  I think my body had produced so much adrenaline that it was leaking out of my eyeballs.   I recovered and came up to the cockpit.  John said, Why don’t you go pour yourself a nice rum punch.  He would have made me one but John’s idea of a rum punch is a big glass of rum and then you punch it back.  I did make myself one and it was a nice.  And after that the wine flowed in true Key West style.