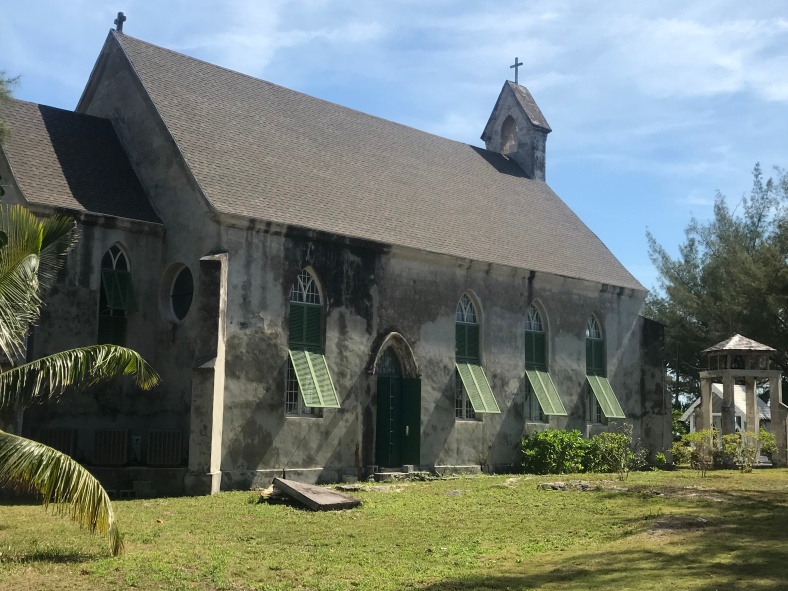 We turned the screw (engined) from Black Sound to Governor’s Harbour as the wind was on our nose.  This is Captain Instantlyexcitedandboyish’s favorite time to troll for fish because we can stop on a dime when we hear the reel drag.  He put on his favorite yellow jig and we pointed Echoes north for a couple of hours ride.  We were settled into a long blue water day dream when we heard the tell tale drag of the line.  Captain Giddywithaculinaryplan pulled in Cyrano de Bergerac the Cero Mackerel.  Captain Fillet-o-fish very meticulously cleaned Cyrano minutes after landing him while underway and tossed him in the fridge.  Two hours later we had Matt and Sadie over for all of the Mackerel Sashimi (raw sliced fish) dipped in soy and wasabi that we could eat.

It was delicate, soft and delicious.  The princess was happy.  Sadie purred with every bite.

We followed up our sashimi with an unusual food pairing of grilled hot Italians served on a toasted bun with of a slice of provolone, smothered with Italian red sauce and sprinkled with raw onion.  I even had a mouth watering Montepulciano to serve with it to work its magic on Matt.  We are moving in the right direction for another conversion for the winos.  Properly fueled, we were ready to join the party in town at the Anchor Bay Fish Fry. 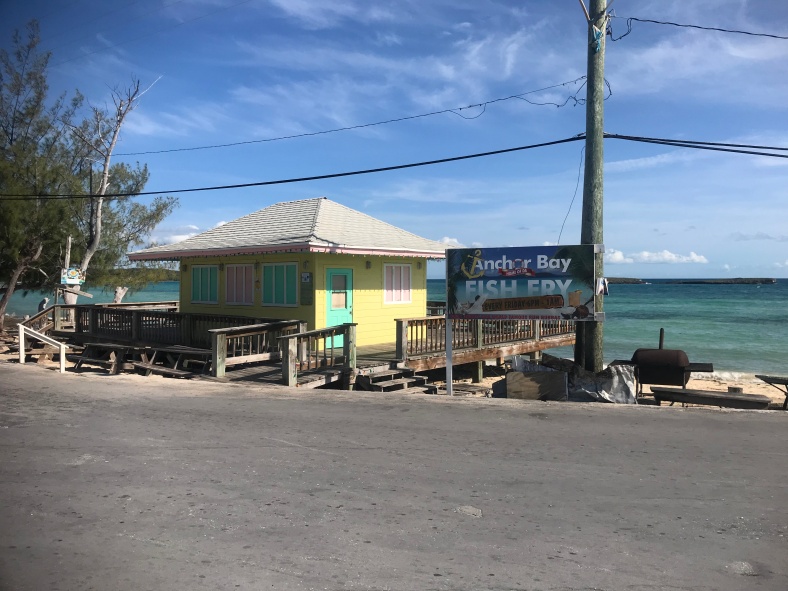 The above quaint building hosts the Friday night Fish Fry and street party at Governor’s Harbour.  Do not let the totes adorbs looks deceive you.  There are gallons of their “World’s Famous Rum Bubbas” in there.

Rum Bubbas are made with rum, punch, rum, rum and a whole lot of dancing juice.  It is quite the locals and cruisers party.

There was a limbo contest.  This was the ending and the winning contestant.  Are you kidding me? 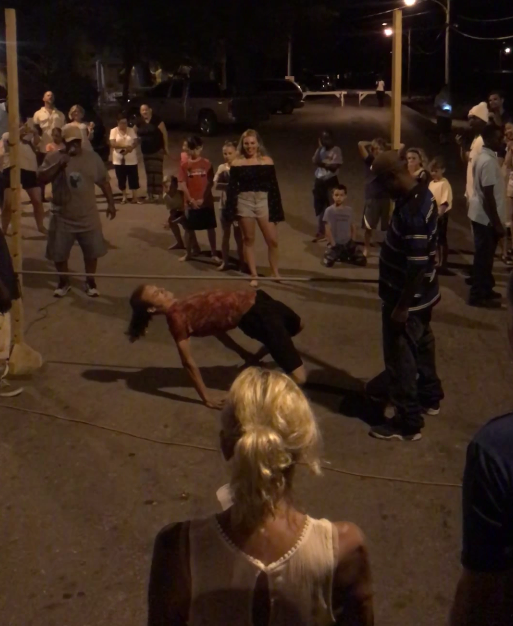 And then the dancing began.  By this time Sadie and I had a couple of Rum Bubbas swimming in our blood stream and we were wiggly.  So we joined the dance and shook out our happiness.  Shortly,  a short local gentleman came to dance with Sadie.  I am using the word short generously.  I think maybe “little person” might be a more accurate description.  Anyway, he would put his arms around Sadie while dancing and his arms would conveniently extend from his shoulders and wrap around her stern, her fanny, her patootie, her badonkadonk, you get me?  The Captains Wedon’tdance were hanging out nearby.    Shortstop would look over and when Matt made eye contact with him his arms would quickly reach up to her waist but as soon as Matt turned his head his arms would quite naturally and understandably fall to a more comfortable level around her magnetic gluteus maximus.  My belly hurt the next day from laughing so hard.  And maybe for other reasons, too. 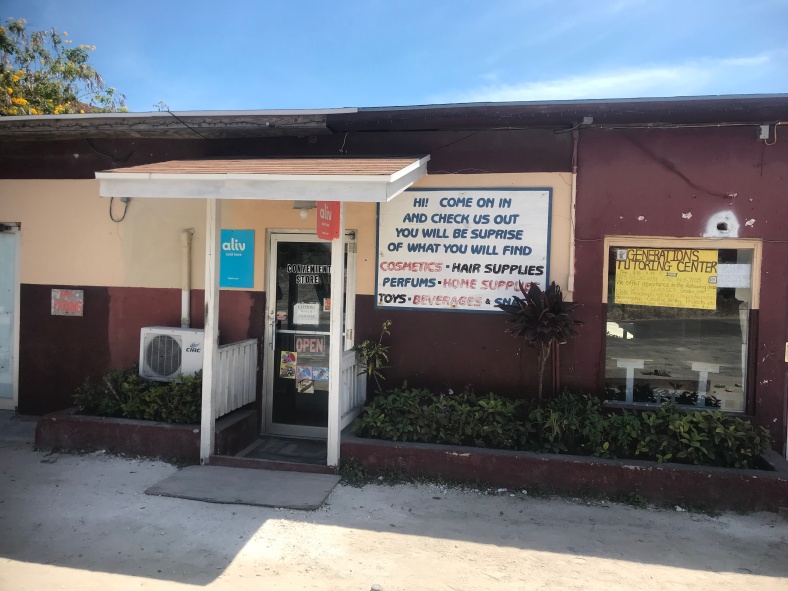 The following day we woke up to bucking roly polys.  Echoes was anchored in a particularly bouncy section of the anchorage and we later ended up moving her becasue of it.  I turn green in these conditions normally so this particular morning I could not get off that boat fast enough.  We spent the day in town like four teenagers loitering.  We had a long lunch at Buccaneer.

Who did we have lunch with you ask?  Rickrack the little baby lamb in a diaper having a bottle of milk. 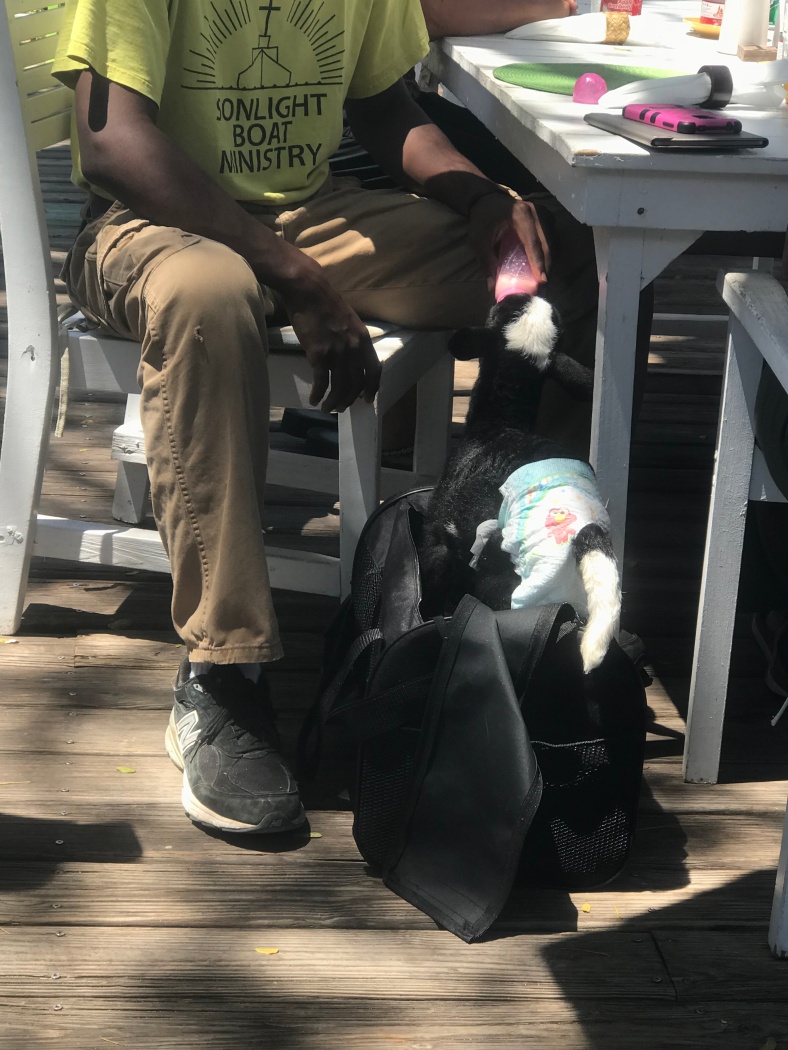 We hung out in the park with a beer each in little paper bags because the cashier told us the bags provide insulation.  The friendly locals would come and hang with us in the park for a while.

We made friends with Dr. Seabreeze the world famous calypso singer.

We ate some memorable BBQ and then hung out with the artists of this wonderful creation. 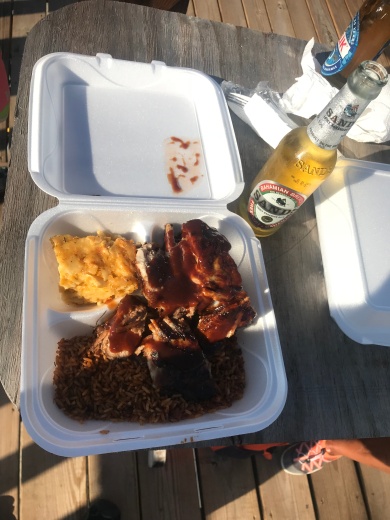 Governor’s Harbour is truly my favorite city in the Bahamas.

One thought on “Governor’s Harbour and Cupid’s Cay”