The Island Nation of the Bahamas stretches over 750 miles with about 700 islands.  The population is a little over 300,000 and two thirds of those people live in and around the capital city of Nassau.  85% of Bahamians are descendants of West African slaves and the other 15% come from settlers from Bermuda or were American expatriates of the Loyalists.  I hope it comforts the spirits of the original slave descendants that their however many greats grandchildren live in a peaceful and absolutely beautiful country of their own.  The islands are quiet and natural.  We are grateful to be here.

We planned to venture back out the cut and nestle into an anchorage on a horseshoe beach off of the Cay after a rather expensive and worth every penny of it night at the marina.  Because we obviously must have pissed off some Sea God along the way, the winds were at 28 knots and gusting.  It was another small craft advisory.  Our bow was pointed to land and the north wind was pushing us hard on the beam and off the dock.  Reversing the boat down the long fairway would have been nearly impossible for us so we needed to turn the boat 180 degrees in a small, windy space quickly.  Captain Itsjustmath had an idea.  We would release the stern line, then the mid ship line and I would stand at the bow with a line singled on the dock cleat.  We would let the wind push Echoe’s ass end around 180 degrees swinging on the bow cleat.   Ready?  It went like clockwork.  The Sea Angels sang.  How’s your stomach now?  Captain Cool asked with a broad smile.

We spent three nights on the hook off of the private island of Cat Cay.  We studied our charts and guides, read, fished, worked on projects, swam, made great food and drank pretty good wine.  The water was gin clear and we watched a curious and fairly large fish follow John’s lure around for about a half hour.  He wouldn’t bite. 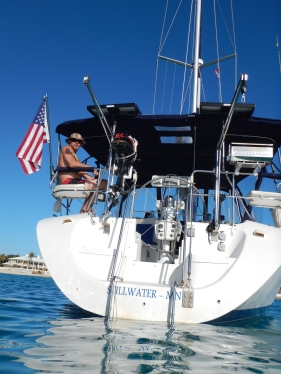 Captain Obnoxious has a habit that puts me on edge and has for over thirty years.  I told you, he does not tire of his own jokes.  Ever.  He relishes saying the word broccoli while belching.  I know this is not entirely for the benefit of annoying me as I have heard him in the garage, or when he doesn’t know I’m around.  Anyway, add beer to the mixture and it is torture.  Brrooccoli, went Captain Gasses repeatedly.  Princess Glaresalot shot him the dagger.  A beer and some casting time later…BRRROOOOOOOOOOOOCOLI!  Oops!  Sorry!  I’m sure it’s not hard for you to imagine how difficult it is to live with any human being in this close proximity for very long, especially your spouse under sometimes intense conditions.  Statistically speaking, half of you couldn’t stand your spouse with all the room in the world to put between you.  Tension was building.  Later that evening, Captain Thinksoutloudandnotsomuch had one too many glasses of honesty juice and made a most unflattering comment with a subsequent suggestion to improve on a part of my personal countenance.  Princess TharSheBlows! went off like a pirate’s cannon.  The next day, Captain Probablyshouldn’thavesaidthat said, I was only kidding.  To which I replied, Right.  Sure.  So was I.  Man, he said, you kid loudly.