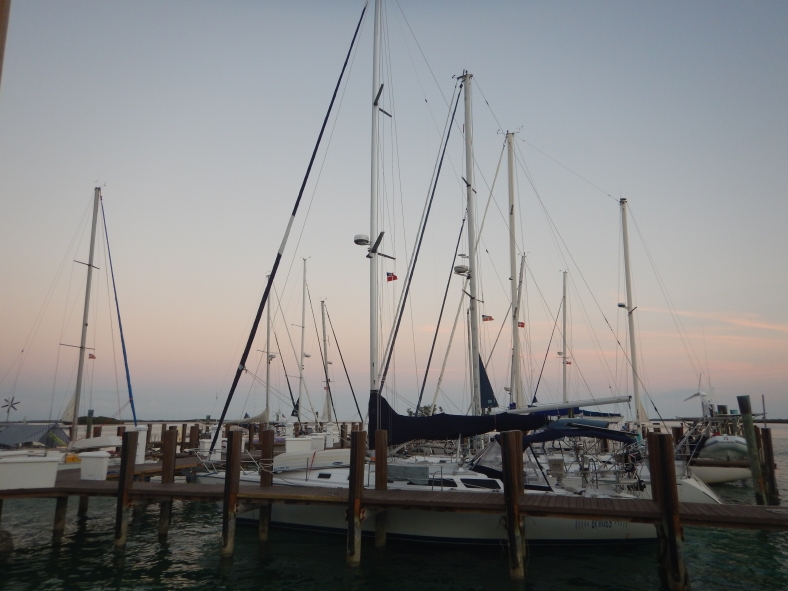 How did I learn that about the tide, you ask? We left Cat Cay and trolled our way up to Alice town in Bimini. Captain Struckout got two good hits and a run for his money but no fish in the end. I stood on the foredeck watching the shallows as we came in the channel and saw a big shark lurking in the clear water depths. We dieseled up (that landing and takeoff went well) and headed for a marina to tuck into for a couple of nights. It was not too windy and the approach to the dock looked easy. But, I swear, anytime we dock my stomach is in my throat. It is nerve busting. The dock master and a pretty sailor were on the dock waiting to help us as Captain Thinksahead requested via VHF. We pulled up just as we should have and Echoes started swinging off course. Captain Letstrythatagain abandoned the attempt and made another swing around for it. Meanwhile, our friends on the dock were shouting that tide was coming in, causing a raucous current and to over shoot the mark and drift into the dock. Attempt two was abandoned at the last fitful moment. A new sailor had joined to help and suggested coming up to the dock from a different angle. The third attempt seemed to be going well until the current quite quickly and fiercely swung our stern and pushed us like a bully with a tooth ache perpendicular to the dock. There was some noise to it all that I hope never to hear again in my life. Yes, the Kraken was shrieking with laughter. Yes, it did leave a mark. Fortunately, we were pinned sideways to the dock and not on another boat. It was advised we just hang pinned for few minutes until the tide would be more willing to give us up. Apparently there is a fifteen minute window in which you don’t mess with Mad Clyde Tide and we were in that window. Finally, four of us pushed with all of our might and freed us from the dock. We decided to try a slip on the southern side of the dock and aside from having to dodge of ferry, slipped right in.

We took a walk to check out the town and came across a man feeding a bunch of Bull Shark. He called them his daughters. This was a school of pregnant mothers and other females. No males are allowed nearby if one of the Bulls is pregnant. He said his daughters were angry. A local Bahamian man killed one of their sisters who was pregnant. This was very taboo. It invokes dark magic so no one was surprised when the man drowned two nights later. His friend drowned trying to save him. He was known as the conch man as he fished for, tenderized and sold conch to the local restaurants. He was a well liked man who was active in his church and known all over town for his smile. But, no one must ever kill a Bull shark and especially one with child. The man’s funeral was today. The island practically closed for the funeral and you saw people dressed in their best or with a t-shirt with his picture on it.

A local man pulled in fishing boat up to the dock beside us after we got back from watching the sharks. He cleaned his bountiful catch of fish and lobster tossing the scraps back to the sea. We bought a dozen lobster tails for $30.00. We grilled half the tails and gorged on them dipped in melted butter. I enjoyed my wine sedative. Afterword, we danced on the dock with our new Aussie friends who helped us land the boat.

Soon, weather permitting, we leave for our next challenge, to cross the Bahama Banks. The Banks are seventy-five miles wide. Echoes can’t make that many miles in daylight. Remember, I will never sail the Bahamas at night! We plan to anchor out in the middle of the shallow banks, in the middle of nowhere. We should reach the southern tip of the Berry Islands the following day.

One thought on “Living Here in Alice Town”