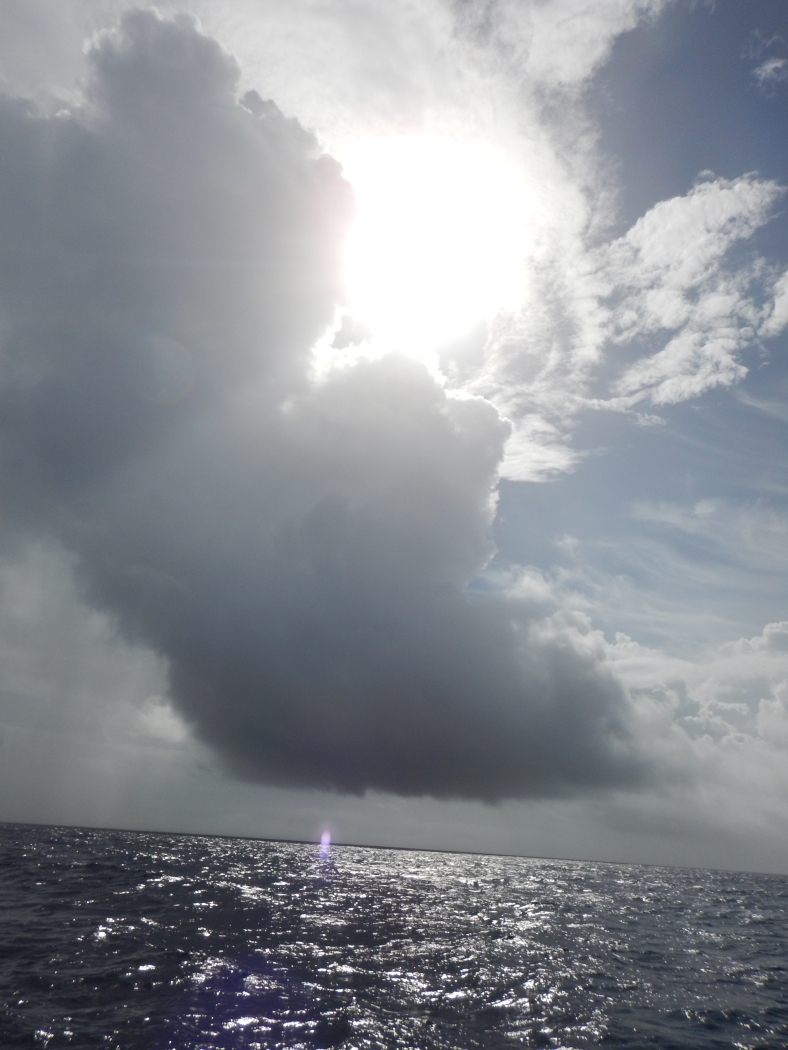 The Gulf Stream is an ocean river that runs north.  It is about ten miles wide and is a few miles off of the Florida coast in the Atlantic.  The stream moves around a bit and it changes speed from two knots to seven knots and sometimes higher.  Crossing the Gulf Stream is not necessarily difficult under the right conditions.  It can be disastrous under the wrong conditions even for seasoned mariners. Weather and wind direction are the key components to watch.  When the wind blows from the north to the south while the Gulf Stream is flowing from the south to the north it causes gigantic waves that they say “stand up” to a possible forty feet tall.  It can be very rough Kraken loving water.

Years ago, John and I attended the US’ largest sailboat show in Annapolis, Maryland to get a feel for the abundant choices of vessels that were available and what would fit our needs.  Climbing around hundreds of sailboats was fascinating, the crab cakes were the best I’ve ever had, the rum drinks called Pain Killers went down easy and we had the great company of my brother and sister-in-law.   We attended a seminar on crossing the Gulf Stream to the Bahamas safely.  The speaker would say frequently, Repeat after me, I will not cross the Gulf Stream with any northerly component to the wind!  And, I will not sail in the Bahamas at night!  (The Bahamas have very shallow waters and the charts are not accurate because the sandy shoals change often.  You navigate with your eyes.)

We were anchored off of Pumpkin Key and North Key Largo hoping to cross to the Bahamas the following day. It would take anywhere from eight to twelve hours to cross with Echoes abilities.  The winds were looking favorable however, there were some thunderstorms predicted in the early hours.  We decided to set our alarm for 3:30 am, check the weather and make a decision.

The alarm went off as did my internal alarm when we saw thunderstorms approaching.  There were conflicting reports but it seemed probable that we would run into a thunderstorm at some point, and most likely, in the Gulf Stream.  The winds during thunderstorms can whip up high and change on a dime.  This is dangerous when sailing.  Captain Fearless wanted to make a run for it but in the end he, too, decided it wasn’t worth it.  We went back to bed with the wind out of our sails.  We awoke around 7:30 to the slight and insulting pitter patter of sissy rain.  There had not been, nor were there going to be, big storms.  So, we had another decision to make.  Do we go for it now, hours later than we intended, or wait another week for another chance?  We decided to go for it.

The risk we were playing with was time.  We would definitely be arriving in the Bahamas in the dark if it took us eleven or twelve hours to cross.  Repeat after me, I will not sail in the Bahamas at night!  This was the dark, grinning Kraken who followed me across the Gulf Stream.  We decided we would sail until noon and then check our estimated time of arrival.  We would turn around and return to Key Largo if we were pushing the light too far.

The coast off of Florida was choppy but not horrible.  The seas were about five foot.  The Gulf Stream was similar with some large rolling waves interspersed.  It was exciting but not frightening.  We had both sails up and also kept the engine running to make sure we didn’t waste one minute of daylight. There was a little rain, some clouds and some sun as well.  We made seven to nine knots, once we were off shore, which was encouraging for our arrival time.  We pressed on past noon.
It was lonely in the passage.  We did not see a boat, a dolphin, a turtle or even a bird.  There was an endless, beautiful, navy blue sea in all directions.  We spent a lot of time gazing at it.  There was 2400 feet of lonely ocean under us.  As we got closer to the Bahamas we crossed a shipping lane busy with freighters that we had to zig zag around.  Then we spotted land.

Nine to ten hours after leaving Pumpkin Key we navigated through a washing machine wave cut into the entrance channel of Cat Cay.   We raised our quarantine flag and headed to our marina.  (A quarantine flag is proper regulation to alert authorities that you are arriving from another country and have every intention of checking into customs.)  We pulled up to a heavenly, spacious, open dock space at a private marina.  It was a good landing, too.  We were all tucked in for about an hour before the sun went down.  Captain Myhero took our passports to the customs office and checked us in to our new home for the next few months, the Bahamas.