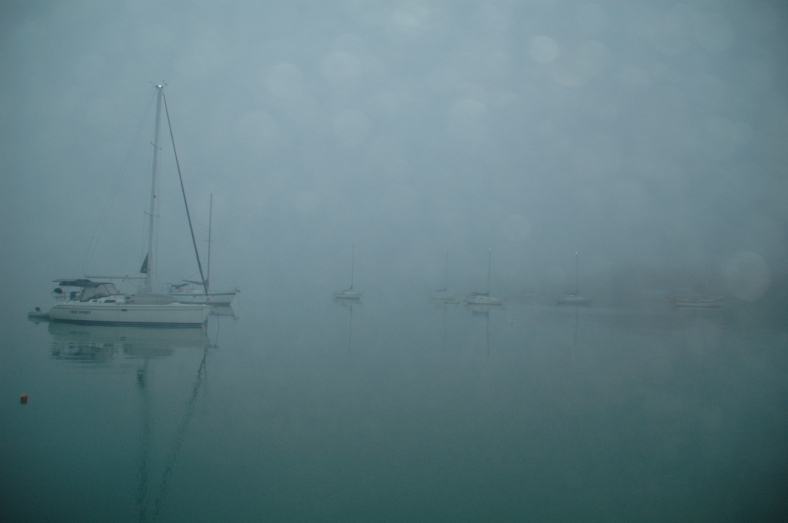 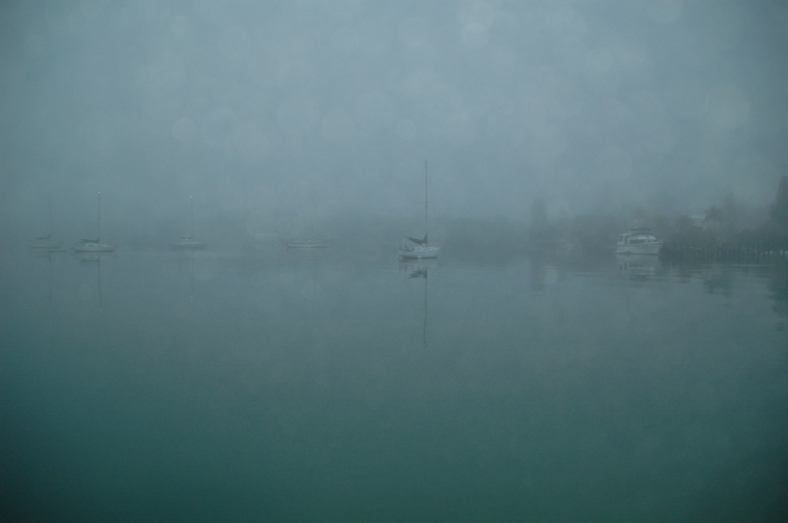 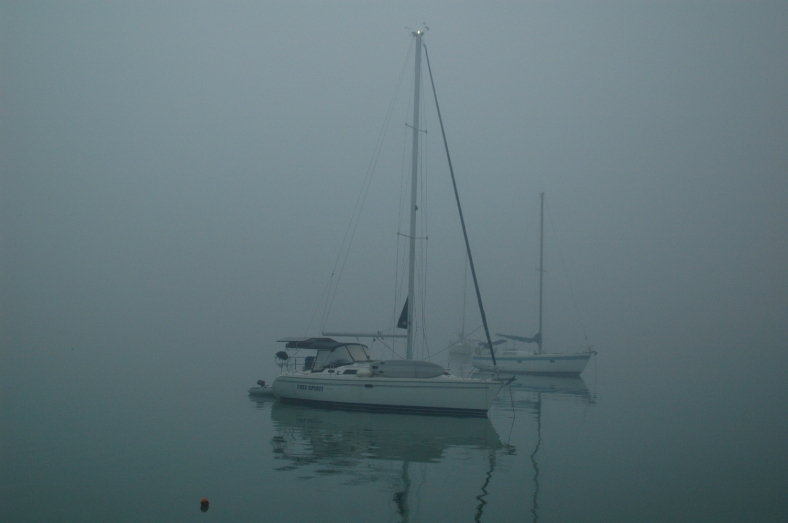 These pictures were taken early in the morning, which means that John took them.  The fog had settled in for a long morning’s nap.  We waited for the sun to chase her away so we could head out into the gulf for a long sail to Venice.  Weather and wind looked good.  It was to be partly cloudy.  The bridge operator warned us that there was fog in the gulf as we passed under.  Copy.  Roger that.  Echoes out.  We figured it was part of what we had just waited out and that it was about to burn off.  We very quickly passed through a curtain of white.  We entered into a world I have never seen before.  It was a quiet, gray world where you could only see maybe forty feet in front of you.  We were on a navigation route of about a mile out into the deep gulf.  A big fishing boat slowly emerged out of the mist right by us going the other way.  It was creepy.   I was standing at the bow to watch for navigation markers and boats and shout back their whereabouts to John.  Our navigation equipment is excellent.  It shows by GPS where you are, the route and the markers which have numbers so you can double check along the way.  We also have radar that displays with a shadowy blotch if anything solid is in front of you and if it is moving.  Later, John will hang a foil like disk on our halyard to make us even more visible on radar for other boats to see us.  So we are creeping along our way.  John is like an excited twelve year old that he gets to use his radar and play with his toys.  I am just nervous.

We make it past our last marker and enter the deep gulf.  I’m still at the bow.  John makes the turn, starts to find his way to our heading and the navigation equipment and radar shut down.  This is the point where you would hear two very different stories if you asked either one of us to tell it.  Let me say that 29 times out of 30 John and I do extremely well under pressure and sorting things out together.  This was a 30.  In all fairness to him, I have to admit I was working off of two accumulative nights of very little sleep due to insomnia.  I wasn’t hitting on all eight.  In fact, I barely reach a seven on my best days.  I normally operate around a five and this was a two to three day.  For instance, the bridge operator hailed me over VHF when we were on our way out to tell me I had missed a marker and was heading to foul ground.  Derp!  Lucky!  And Hurrah for bridge operators!  I blew him kisses as we went through the bridge opening.

We are slowly spinning in circles.  I go back to where John can hear me, because apparently he cannot hear my shouted inquiries, and ask, Gee captain, what are you doing?  I find out that we have no navigation.  I attempt to launch a back up navigational program from his tablet and bugger it up.  It is suggested I return to the bow.  Five minutes later I spy the last navigation beacon from the channel and, my story goes like this….I walk back to the cockpit and say, Hey handsome, why don’t we just circle that there beacon until we get it all sorted out.  John’s version goes like this…..I come running into the cockpit waving my arms and flopping like a fish out of water screaming, WE ARE GOING TO DIE!  HELP!  HELP!  WE ARE GOING TO DIE!  It is suggested that I go back to the bow.  So at the bow I sit for another forty five minutes.  At one point I heard a boat nearby and yelled back at John informing him.  He took it in stride.  I imagined drunk teenagers on a cigarette boat plowing through the fog and splitting our boat in two.  I was scared.   At another point, John gives the air horn three long blasts and I shoot up four feet in the air and almost off the boat frantically looking for what he saw that I missed.  After he hits the horn he yells, I am just doing that for safety.  After?!

I am a person of strong faith.  I am verbose with my creator.  Shocking, I know.  Right about this time I imagine him saying, My Myself!  For Myself’s sake!   Michael, Gabrielle, Frank, Bernadine, anyone!  Go send that woman a sign.  I need some peace!  I am sitting at the bow with my nerves, eyes and ears pealed.  I notice something in the water, small, nonthreatening.  It is still a thick fog.  The seas are glassy smooth; the wake is calmly rocking the boat.  The light is diffused and the air and water are a soft, gray green.   We are moving very slowly.  As the object comes into view out of the mist I cannot believe my eyes.   It is a perfect, large, bright magenta flower petal from some tropical flower.   We are over a mile out on the gulf!  And then, another one, and another.  One passes on our starboard and twenty feet later another passes on our port.  They are floating on the water, curled up at their edges.  They are not damaged and they are not waterlogged.   They look almost velvety.  About a dozen of them floated past and we drove right through them.  When you mark your destination on the GPS navigation screen it creates a line that you follow.  That line is bright pink and it is called the Magenta Line.  I could breathe again.

Shortly after, John comes up mid ship to take a winky tinky.  When you do not have working navigational equipment you do not leave the helm without asking someone to take watch.  So I said something like, Gee honey bunches of love, are you using your bodily resources to tests the depths of the ocean since the depth sounder doesn’t work?  Or, it might have come out more like, What the hell are you doing?  John said, Oh, no problem.  I got the equipment back up and running over a half an hour ago.  I said, And you neglected to tell me?  He shrugged and said he thought I knew.  That boat before?  He knew by radar it wasn’t going to hit us.  I was afraid to open my mouth in case a string of cuss words flew out with such force that they would have stuck to him and he’d have a nick name forever more like our anchor.  So I communicated the best way I could think of at the moment and flipped him the bird.  I am not proud of that.

After three hours of fog, it lifted.  Anger cooled to ash and blew away with the breeze.  The equipment malfunction was partly fussy equipment, partly still unresolved and partly operator error and a learning curve.  We put up our sails and sailed the rest of the way to Venice.

In Venice we did our usual marina necessaries, laundry, grocery, cleaning.  We also met up with my aunt and uncle again for a great evening. 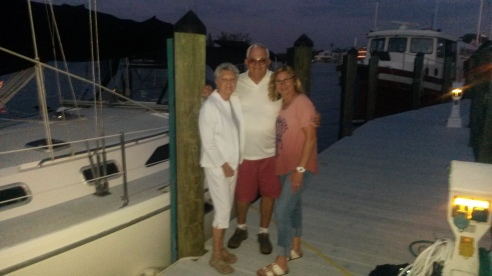 8 thoughts on “Long Boat Key back to Venice”