We threaded the needle out of the Anna Maria inlet and decided to sail the gulf side back to Long Boat Key for a couple of nights.  John checked the weather like a good captain and we headed out.  The seas out in the big boy water were bumping, rolling and angry and showed no signs of calming down.  After forty five minutes of bopping around like a toy sailboat flushing down a toilet we decided to give up, retrace our steps and go back down the Intracoastal.   We checked the weather again once safely in and they had changed it from three foot seas to six and from twelve knot winds to twenty five with gusts.   It is hard to capture roiling seas on camera but this was my attempt. 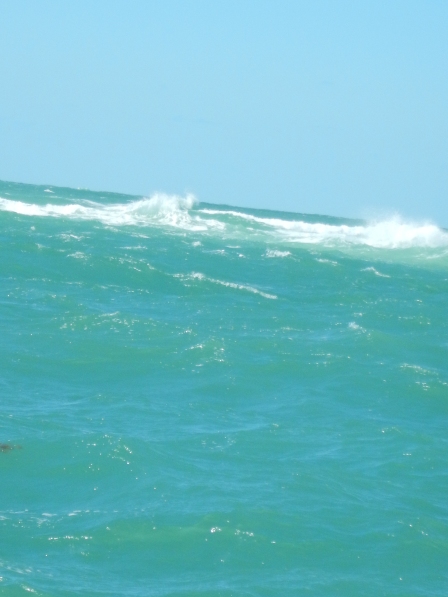 Be forewarned, if you find offense in colorful and inappropriate language you will not like the rest of my story.  I am a sailor you know.

I have to back up and tell you about our anchor, Bitch Pussy.  In all of the 15 years of our sailing it has been my job to handle the anchor and John’s to helm the boat as we set anchor.  Anchoring, in my opinion, is one of the more dangerous and difficult parts of sailing.  You can imagine that anything that can hold a twenty two thousand pound boat in a raging storm has some power and moxie.  Launching and setting such equipment is difficult.  You have to man handle the anchor off the bow roller and let out just the right amount of scope out the chain locker (Math!  Oh no!) in the relation to the depth. If your hair, or clothes, or digits get caught in the chain, well, I shudder to think about it.  I once got a black and blue big toenail from a chain during anchoring and was grateful it was just that.  I have deep respect for this equipment.  Why wouldn’t you just helm and have John do the anchoring, you ask?  Because helming a boat in tight quarters to a precise locations is extremely difficult.  Imagine trying to parallel park a city bus in between a Ferrari and a Rolls, with no brakes, on a moving road, with very sloppy steerage, possibly during a storm.  Have you seen the dent on the front quarter panel of my truck?  It is from a cement column in my local library parking garage.

Echoes’ anchor and equipment is different than any of the boats I’ve sailed.  Her anchor locker is shallow and part of her anchoring equipment is manual.  You have levers you have to place in gears and manually crank them rather than pushing a button on a remote control.  This anchor chain has the habit of jumping off track which then drops the anchor and massive amounts of anchor chain at an alarming speed and with a force behind it that is truly frightening.  You just have to let her go.  She does this jump thing both in deployment of the anchor and during retrieval.  To rectify this, you reach down in the anchor locker and move the heavy, smelly, rusty chain so it doesn’t pile up.  Now your body is in and around this equipment and still she will jump track on me.  It scares me shitless and I have sworn at her so many times her name has just stuck. She is no longer”the anchor.”  Actually, her full name is Bitch Pussy Mother Plucker Shit Head Rat Bastard, but we call her Bitch Pussy for short.  After a particularly difficult fight with her I told John, That’s it.  I’m helming from now on.

So back to the blustery day where we couldn’t sail the gulf because of all the wind.  Now we are anchoring on the somewhat crowded anchorage off Long Boat Key and it is still windy and I am helming.  The wind is pushing me one way, the current is pushing me another way and you have to keep the boat nose to wind because if she spins sideways you have lost control over her.  The key is to put her in gear, give her some throttle and then back to neutral to let her continue her twenty two thousand pound momentum.  You can’t be shy with the throttle or the wind and current will take control.  John is shouting directions to me (because of the wind and noise of the engine.)  Aim towards that boat and then cut it 90 degrees over there so we approach nose to wind!  So I change the course I was on, slip her in gear, give her a great blast of throttle and dig her but good right into the ground.  I didn’t watch my depth.

It took ten minutes of churning up sand, spinning the boat so the rudder could dig its way out and me scooting on my seat to give it more momentum.  I thought for sure we would have to call Sea Tow but we were off and got right back at it to anchor successfully.  John took it all in stride.  Two times my hero! 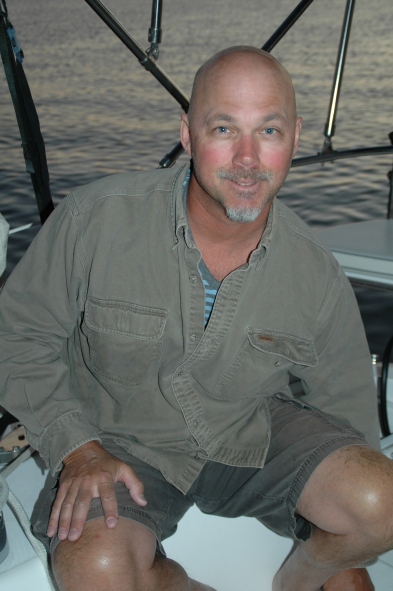 We hung out the next day watching thunderstorms come and go and relaxing.  We had an awesome meal that deserves a post of its own sometime.  A couple of strikes but no fish.  We were in chatting distance from a fish charter and I watched an older woman form Iowa man handle her fishing pole as she gave it everything she had to real in a big one.  She was screaming, SOMEONE HELP ME!  HELP ME!  I CAN’T TAKE IT ANY LONGER!   The fishing guide came to her rescue and said, Madame, you have caught my anchor line.

How about a bird story ?  I’m sorry I didn’t get a picture.  I watched this bird that acted so much like a loon but didn’t look like one I recognized.  He would raise his white chest out of the water and flap his wings like only loons do.  I figured he was some kind of a sea loon.  I looked him up in my bird book and he is a Common Loon.  The very same kind that we have on our lake in Stillwater in the summer.  They winter in Florida and their winter plumage is dull grey brown and kind of fluffy.  Also, they don’t make any sound during the winter.  The sleek, black and white plumage and haunting calls are for their festive breeding and brooding months.  Isn’t it amazing that I might see that very bird again this summer at my house?

5 thoughts on “Back to Long Boat Key”