We anchored at Royal Island to position ourselves for an early departure for a long sail to the Berry Islands.  It was rough and roly and I was wrassling with B.P. who was being a big B.  She ripped the snubber out of my hand.  The snubber sank along with Captain Iknowwhathewasthinking’s mood.  He jumped in the water and dove often and deep to finally find and retrieve it. 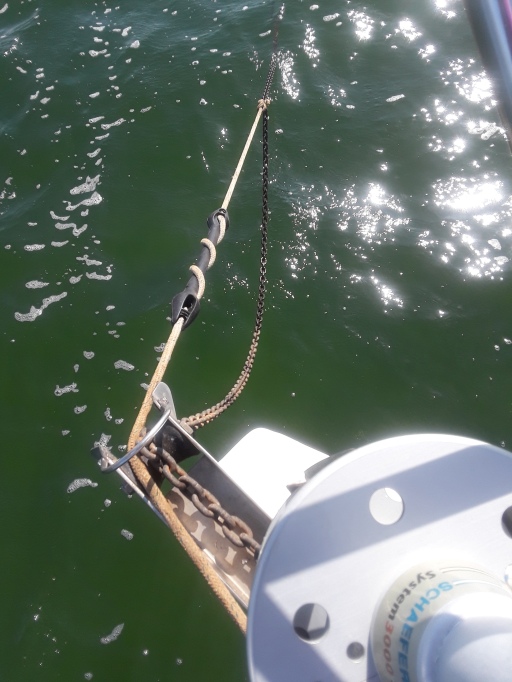 The snubber is the rope with the black plastic.  It hooks on the chain and you cleet the other end off on the boat.  I works as a shock absorber and also reduces wear on your boat from the chain.

Before we anchored we took Echoes out the unfamiliar and unmarked cut we would be using the next early morning so that we could follow the breadcrumbs on our navigation unit when we left in the dark.  We awoke at 5:00 am to begin our full day sail.  We put up the sails and followed our breadcrumbs out to the Providence Channel as the sky began to brighten.  Unfortunately, the wind was worn out and was determined once again to give all humankind weather predictors the middle finger.  We took the sails down and engined for eleven hours.

At long last we dropped B.P. after Captain Optomizeoptomizeoptomize checked out a gazillion possible anchor spots on two different islands.  We grilled the last of Elmer the Mahi.  Mmmmm. 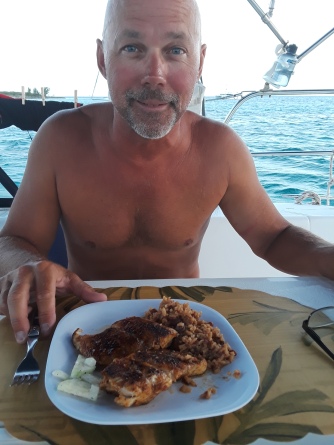 We sailed the following day for six hours through some persistent and wicked rain to Great Harbor Cay Marina.  There was heavier weather coming with fifty mph gusts predicted for the next couple of days.  The marina was packed full and had to turn away boats looking for safe harbor.  That night the marina hosted a pot luck with music from the cruisers.  Some friendly retired musicians on a beautiful and spacious power cat brought out their keyboard, amps, disco lights and microphones.

The professional couple were accomplished musicians and singers but leaned toward show tunes and hymns with heavy falsetto.  A marina employee jumped in and picked up the pace a bit.  Average Joe finally worked up his nerve to come to the mike for his first public appearance with his out of tune guitar.  He sang Cover of the Rolling Stone with a cracky voice and the crowd went wild.  That gave courage to a barrage of shoddy musicians with excellent taste in music and the crowd doubled in size, singing and dancing. 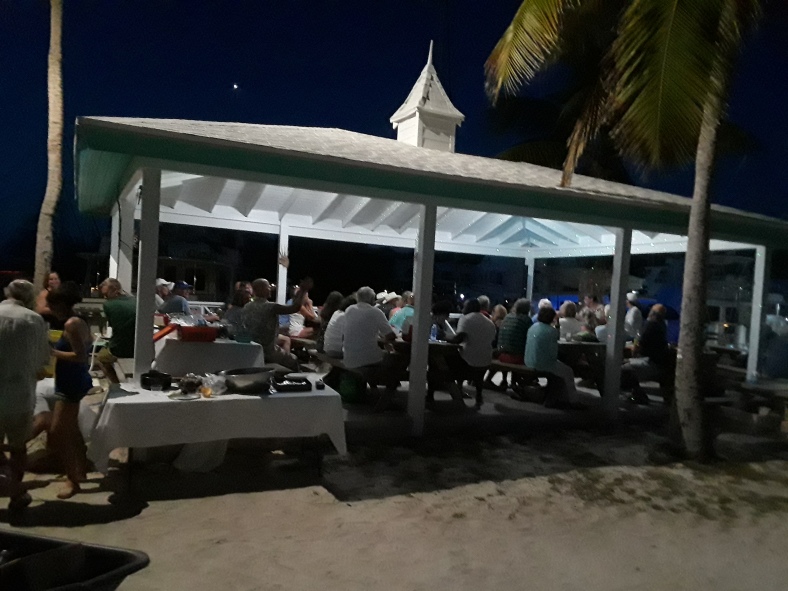 It was here that we met Charlotte and Diane and the research vessel Garvin’s team.  Garvin was a boat full of thirteen Marine Biologist PHDs and PHD students on a trip to repair and collect data on echo tracking devices for whales.  There are five kinds of whales in the Bahamas.   Charlotte and Diane own and operate the Bahamas Marine Mammal Research Organization.   Google their website, watch some cool videos about whales and leave a donation!  We told them about Echoes, from the Pink Floyd song :), and how our boat’s name is related to the Echoes of whale calls.  They were giving a presentation to the other scientists gathering information with them.  They invited us aboard Garvin the following morning to attend.

It was a two hour, fascinating presentation on everything whale.   I particularly enjoyed hearing about gathering whale doo doo to analyze diet and stress hormones .   Some whale species’ keester cakes float and some sink.   It is not easy to collect.  The collectors are dragged along the side a boat (the sharks are more likely to attack if drug behind the boat) until a whale blasts a deuce.  It is a voluminous affair.  Then they have to dive through it to collect it in special nets.  We learned that the Sperm whales in the Bahamas are smaller than Sperm whales in other parts of the world.  They believe this may be due to limited feeding ground and dwindling food supply.  Also, they are working with MIT as they are finding dead beaked whales with blown out eardrums due to the Navy using a part of the Providence channel to practice submarine sonic cat and mouse mock warfare.   They are trying to find a way to protect whales from entering these waters during these times.  These ladies have dedicated a whale share of their lives to whales.  We were grateful to have spent time with them, their lively group and to learn a great deal about whales.  And, they were just plain fun. 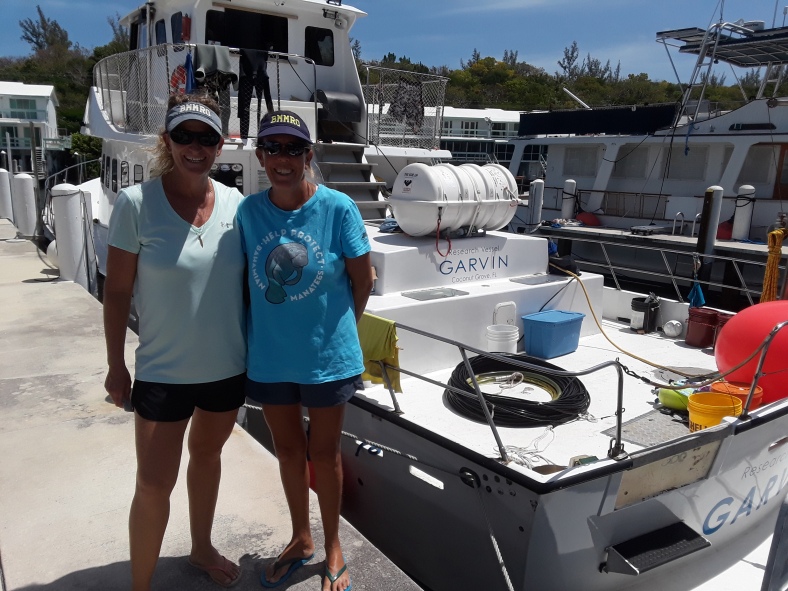