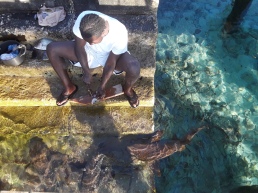 An angry squall was coming with her bully brothers wind.  We tucked in to the well protected harbor of Black Point to wait it out.  The winds were a steady twenty to twenty five with gusts up to thirty five.  We spent days stuck, swinging around on Echoes and with my hands getting closer and closer to Captain Notagoodboredman’s neck.

Black point residents take great pride in building their own class C boats and racing them in competitions.

We leave the VHF on twenty four hours a day when there is heavy weather in case someone sees a boat, hopefully not yours, dragging anchor, or a runaway dinghy.  We were woken up at three am to a VHF argument between two freighters one stormy night.  A smaller delivery boat was tied to a dock where a big freighter felt he had the right to be.  We woke up to their angry curses and threats.  Woke up implies we were sleeping.  We barely slept that howling night.  I imagined the roar of the wind was from kraken drowned banshee spirits recruiting for the dark undersea by trying to send our boats into the craggy walls.

A small grocery store on Black Point.  Typical Bahamian meats in the freezer are steak of an unknown cut, pork shoulder chops, chicken wings , occasional lamb shoulder chops and frozen hamburger patties.  All are packaged in plain ziplocks and are of questionable quality.  The women at Black Point weave fronds to make the purses, baskets and dolls you see on the left.

All boaters underway, and often when anchored, have VHF tuned to channel 16.  Channel 16 is the hailing and emergency channel.  You move channels to have a conversation with the boat you hail.  There is a protocol of procedure and language;  roger, come back, over.  For instance, if we want to reach Joy we hail them on channel 16… Joy.  Joy.  Joy.  This is Echoes, over.  And then they respond, Echoes.  This is Joy.  Let’s go to 17.  You move channels and carry on.  Sometimes you hail boats for social reasons or other times with questions of navigational intentions, or to gain information.  You soon recognize not only the many boat names within your VHF vicinity but the voices that go with them.  Some of those voices are almost cartoon like and we have our favorites that we make fun of regularly because we are not nice people.  It is fun to run into the boats (not literally) you have been hearing and occasionally you meet their people.  Oh look, there is Von Yachtzki.  Or, So that’s Bumfuzzle.  Once we were at a happy hour and as soon as the man spoke I knew exactly which boat was his.  He was one of the voices we often mimic.  Like we might say, Dahhling, can ahh pour you ah libation of yah pleasuhhhhh?  I couldn’t look at Captain Twinkleinhiseyes as the man introduced himself or I knew I would lose it.  Hah, Ahm Thurrrston from the yachhht I’vegotmoremoneythanyouandbiggenitaliaaswell.

Myself, Elizardbeth, Igor, Tinkerbell, Godzilla, Junior and Juanita the protected Bahamian Rock Iguanas.  Well, not me, I’m not a protected Iguana but the rest of them are.  These and many pictures courtesy of Soul Divers paparazzi.

As you know by now, Captain Mercelesslybadgersme never, ever tires of his jokes or games.  He is still making ridiculous bets.  And  remember Echoes, like the Pink Floyd song that I stupidly let him know drives me nuts?  I went to sign a guestbook at Farmers Cay yacht club and Captain Itsstillfunforme had already signed it.  I didn’t even let him know I saw it.  Do not fuel the fire.

Captain Mustbedoingsomethingconstantly is frankly not pleasant to be around when he is bored.  Bugging me becomes his favorite time filler.  You can not give him any reaction to his shenanigans or he will grab hold of said annoyance and beat you with it until you want to kick him in the nylock nuts.  You have no idea how hard holding in your annoyance is on your third day stuck bobbing in howling wind.  Sometimes I can feel my eye twitch and my veins pop.  I was loading up pictures when he decided to hail Soul Divers about something.   Soul Divers!  Soul Divers! Soooul Diiiivers!  This is ECHOES!!!  Cooome on back, ya’hear?!, Captain Obnoxious shouted in the VHF with his best and quite accurate Gomer Pyle imitation.  I couldn’t help myself.  I lost it.  I screamed, STOP THAT RIGHT NOW!  as I threw a pillow at him.  It was the nail in my coffin.  He giggled like a ten year old finding his first Playboy and did a little happy dance.  He got me under my skin and he knew it.  So now this is his new VHF hailing voice he uses frequently no matter how much I have ignored it since my fatal mistake.  And now when we pull into an anchorage our fellow boaters will see our cattywampus, bounced between pilings bow pulpit, our dock rash, me at the bow wrassling B.P. with rust all over me and mumbling obscenities like a mad woman and then they will see the name Echoes and think, Oh my word, its that boat with the guy that sounds like a complete idiot.  Should we pull anchor and reset somewhere else? 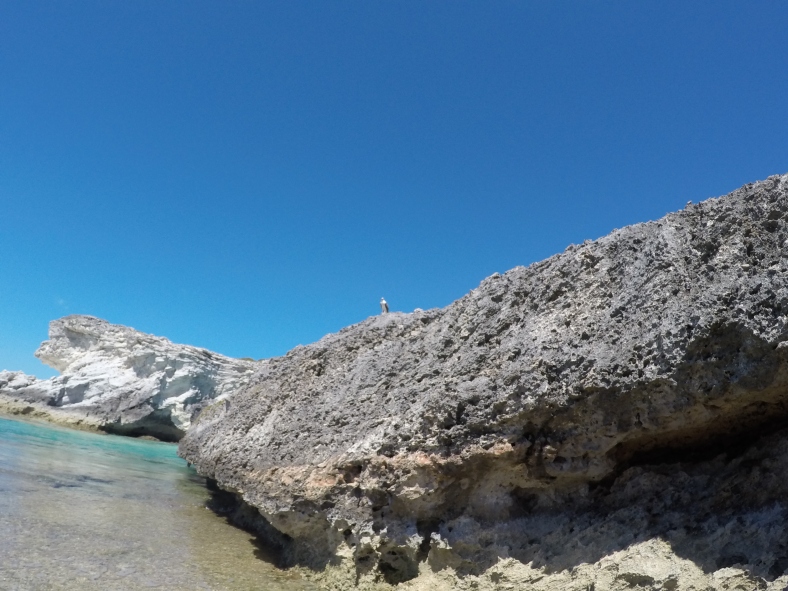 The winds began to calm in the late afternoon after three days of captive Captain hell.  I’m sure everyone was anxious to move on, get off their boats and a few more feet away from their spouses.  Our neighbor pulled anchor at 4:00 in the afternoon which is unusually late.  Captain Curious watched them go because they left their anchor dangling in front of the bow where it could bang into the hull and cause damage.  Let’s call that boat Oops.  Oops went about two hundred yards weaving through the boats in the crowded anchorage and unfortunately cut a small sailboat a little short.  Let’s call that boat WTF.  Oops drove right over WTF’s anchor chain, or most likely anchor line, and got all tangled up in it.  Next, Oops swung smack dab into WTF.  WTF ran out with fenders to put in between the boats.  Several fellow sailboaters jumped into their dinghies to provide assistance.  It seemed as though WTF’s anchor line was wound around Oops’ keel, or maybe even his prop.  People were snorkeling and buzzing around in their dinghies trying to fix it.  Finally, WTF released their anchor line from their boat and drove off with the anchor still set to nothing but the seafloor.  Oops somehow got loose after some assisted fiddle faddling and also drove off to reset.  WTF came back to their anchor and with aid of a couple dinghies retrieved the loose end of their line and retied their anchor to their boat.  I don’t know which boat I felt the most sorry for.  For some reason I seemed to relate more to Oops. 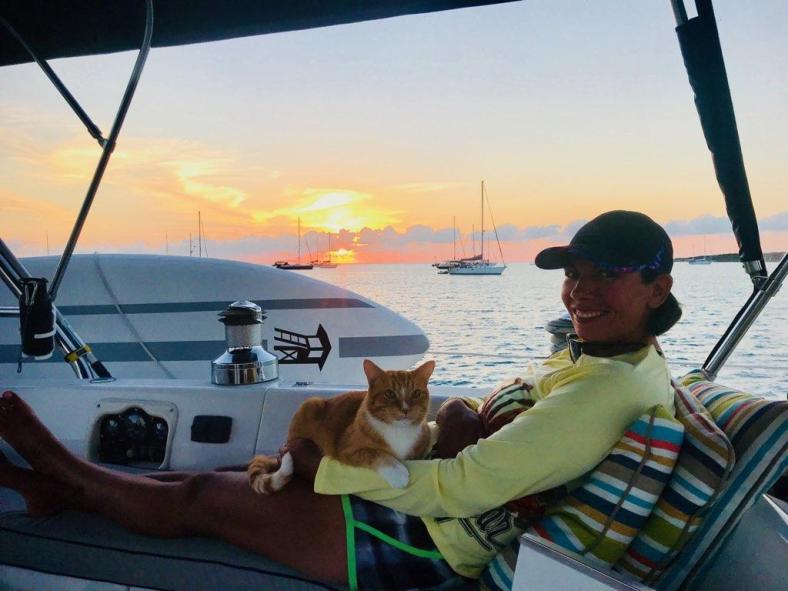 Sadie and Toby enjoying the last beautiful evening before the weather turned some of us, ok me,  all grey and grumpy.

The excitement over, Captain Boredoncemore started acting like a pirate…again.  Come ‘ere ya wench and bring me some rrrrrum! he growled simply to entertain himself.  And then he chased me around the boat, I’m Long John Silver and I’m gonna shiver your timbers.

I’m ready to move on from Black Point.