Soul Divers haled us on VHF to catch up after a few days.  I lamented about our broken solar regulator and some long nights bobbing around our anchorage.  They had it worse.  As they were bobbing around on their anchorage, their boat started taking on water.  They were up all night pumping one gallon of water every twelve minutes out of their bilge and figuring out where the saltwater was coming from.  Apparently there is a leak coming from their anchor locker into their boat.  These are the people who have been through hell getting their boat fixed after Irma beat it up.  It is not a cruise stopping leak but it is not good news or easily fixed.  However, if you are going to be stuck with problems somewhere, Staniel Cay is about as good as you could ask for.  We made the most of it by fitting in some fun.

I am completely humiliated to admit this, but I love the reality TV show, The Bachelor.  It is so lame and so ridiculous and so unreality that I simply can’t help myself.  In one episode of The Bachelor the young stud looking for “a wife” went with several candidates blessed in the bikini top region but shorted in the brain region to Pig Beach on nearby Big Major Cay.  Much to Captain Whywouldyouwantoswimwithafilthypig’s dismay, this was a must on my list.  I had to see this with my own eyes.  The pigs greet you on the beach and swim up to your dinghy at your arrival.  You are encouraged to them feed vegetables and bring them fresh water.  Unfortunately, it was another tour boat, crowd cringing, attraction.  There were so many bikinis that Matt said, Pigs?  What pigs?  I haven’t seen any pigs.

You are to throw the veggies in the pigs mouths but never turn your back on one.  They can be assertive, jump up and knock you down.  I brought a huge bag of carrots and Sadie had a variety of vegetable and fruit goodies.

There were adorable piglets.  The tour boat guests would pick the piglets up for pictures and the poor piggies would squeal with disdain.  Watching piglet pee run down a disgusted bikini girl as she manhandled a squealing piglet was a true highlight for me.

I got tired of feeding pigs so I started feeding Asians.  (I was actually sharing my carrots with these polite visitors.)

And since we had pork on our minds, Soul Divers invited us over for homemade pork tacos.  They even made corn tortillas from scratch.  It was a feast of piggy proportions and wonders.  We were so excited we forgot to take a picture.  Sadie pointed out to Matt that he forgot to add avocado and all the good fixings to his first taco as he dove in.  Matt said, I am so hungry I had a premature etacolation.

We returned to Thunderball Grotto a couple days later with Soul Divers purposely choosing a higher tide and stronger current to avoid tour boats.  We practically had the place to ourselves.   It was truly beautiful. 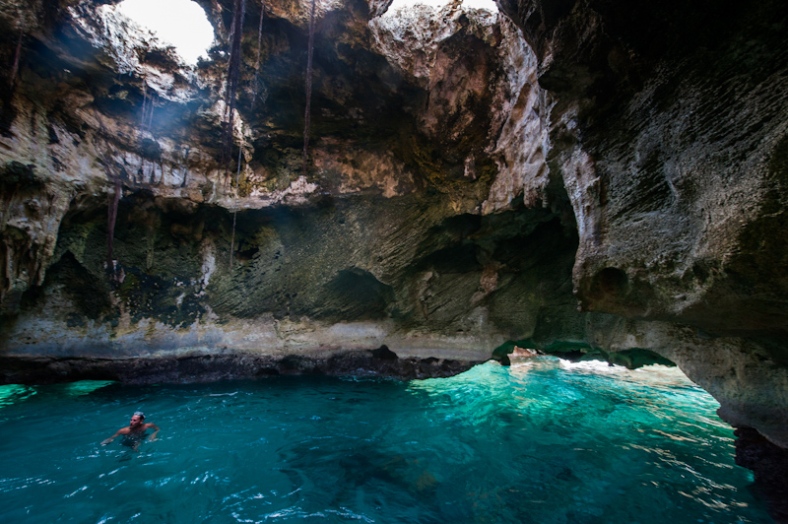 We have been at Staniel Cay over a week waiting on parts.  We have gotten to know the island and the store owners fairly well.  We have our favorites but one of the best is Ruth.  Ruth’s brother owns the combination laundromat, liquor store, tiny bar. 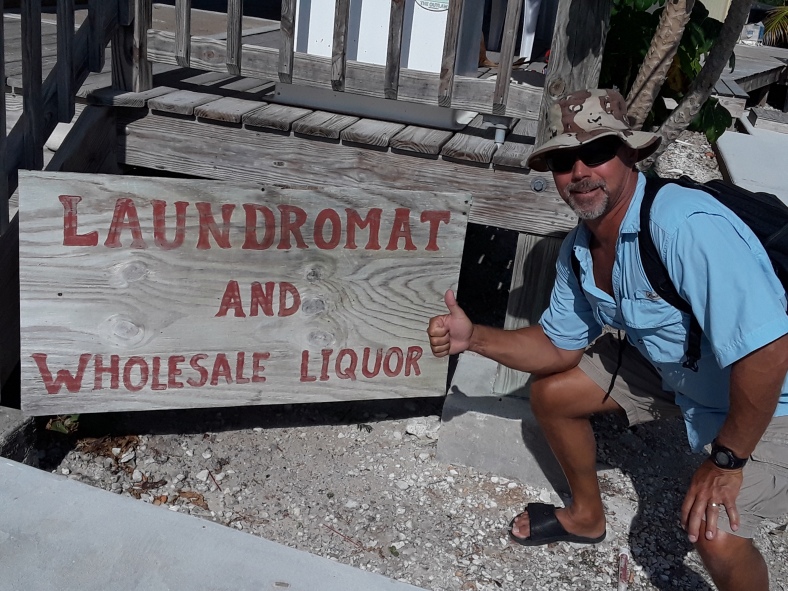 Ruth did our laundry for us.  That was her first in.  But best of all, she gives Captain Rarelyspeechless so much shit that I am sure he has met his match.  We have often gone to the laundromat simply to hang with Ruth and have a beer.  I call her, Ruth the Truth.

Ruth is saying, Hurry up with the picture!  I can’t suck it in any longer!

We skipped the St Patrick’s day whoop it up at the Yacht club to relax on the boat.  First Captain Creativebait caught a fish on old chicken skin.  We identified the fish in our scuba diving fish book and then googled it to see if it was good eating.  It was not.  It is called a Sand Tilefish and is referred to by  locals as Slippery Dick and the Haitian Hot Dog.

And then Captain Welldonesir caught our dinner on old steak gristle.  This was a most delicious Yellowtail Snapper named Yummy.  Captain Tookatripdownmemorylane said Yummy was quite a prize but not even close to the monster lunker of a walleye he caught with his childhood friend, Timmy, on Pine Lake in Crandon, Wisconsin. 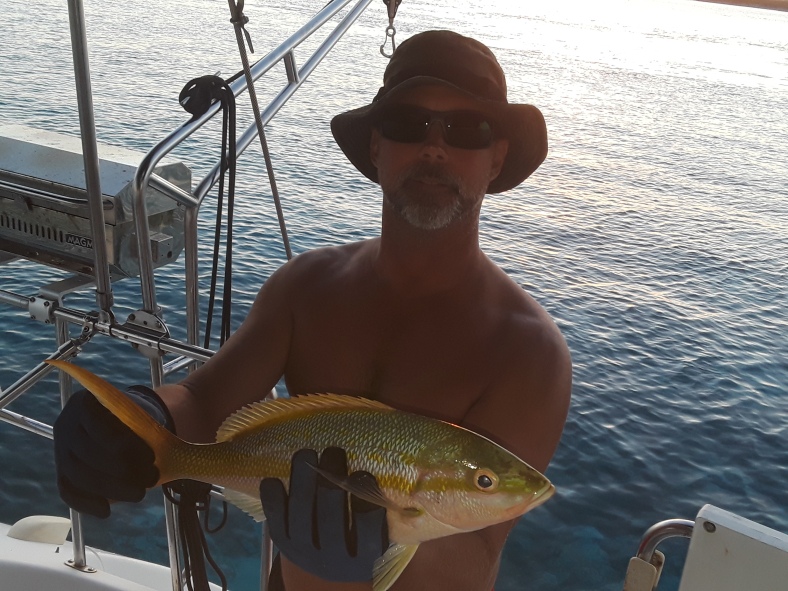 The Solar Regulator company we paid second day air shipping rates to made a mistake and sent our regulator USPS ground.  It isn’t due to arrive Fort Lauderdale for another four days before it can be sent to the Bahamas.  We will leave Staniel Cay tomorrow making due with limited power and return to pick up our parts as soon as they arrive.  It is time to head north again so this delay is frustrating.  We are heading south to Farmer’s Cay where we will hopefully catch a mooring ball before the crowd arrives to ride out another blow.