Warderick Wells is the headquarters for the Exuma Cays land and sea park and is a spectacularly magical place.  The park location was chosen for its rocky bluffs, sand dunes, salt flats, mangrove creeks and beautiful reefs.  We were blessed to score a mooring in the coveted north channel right next to a well known snorkeling site.  As we pulled in we saw our buddies on Cerulean were moored there as well.  We settled in, put the engine on Tip Sea and headed to land.  You are greeted on the beach by the reconstructed  skeletal remains of a 1953 Sperm whale who died from eating a plastic bag.  Our friends from Joy rebuilt it after a hurricane knocked it down several years ago.  The small park office is just off the beach and as are trailheads to over seven miles of hiking. 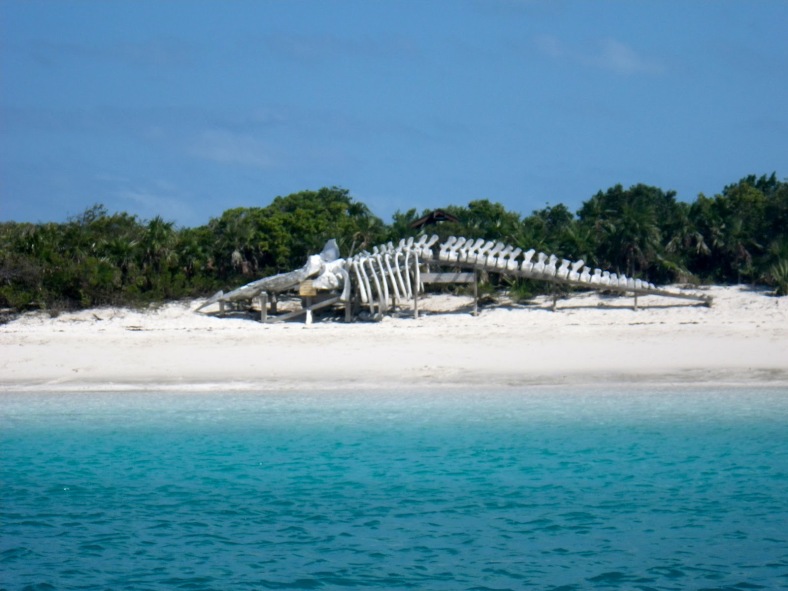 We headed to the most famous of these trails, Boo Boo Hill.  There is legend attached to Boo Boo Hill.  The hill is famously haunted by missionaries who went aground on a reef and parished just below Boo Boo Hill.   You can hear their singing on the nights of full moons.  I think these parished missionaries are what makes this place so magical.  It is a tradition for cruisers to appease King Neptune and the sea gods with an offering of driftwood with your boat’s name on it at the top off Boo Boo Hill.  We didn’t bring any driftwood and you are not supposed to remove anything from the park so we put Echoes’ name on a shell from my shell collection and left it with the driftwood pile.  I figured this was appropriate because you can hear the echoes of the sea and its ghosts if you put a seashell to your ear.

We continued hiking through beautiful, rough terrain.  The earth beneath our feet felt wonderful and the sights were soul quenching.  We hiked for hours. 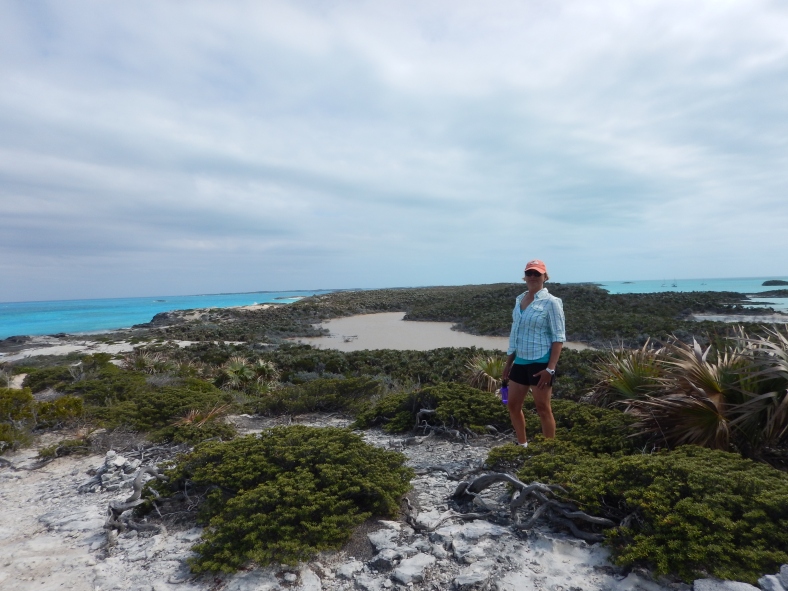 When we came off the trails there was a large sundowner happening on the beach.  All the cruisers grabbed their cocktails and snacks and dinghied to the beach to mingle and sip.  There we found our good friends Christopher and Robin from Cerulean.  They introduced us to people in which we had something in common.  There were maybe twenty boats moored at the north end of Warderick Wells.  Unbelievably, three of the boats there were from our home town of Stillwater, Minnesota, population of less than twenty thousand.

We made plans to have our friends from Cerulean over for a sundowner the following evening.  The next day we hiked on snaking trails beneath the palms and across craggy, sandy cliffs. 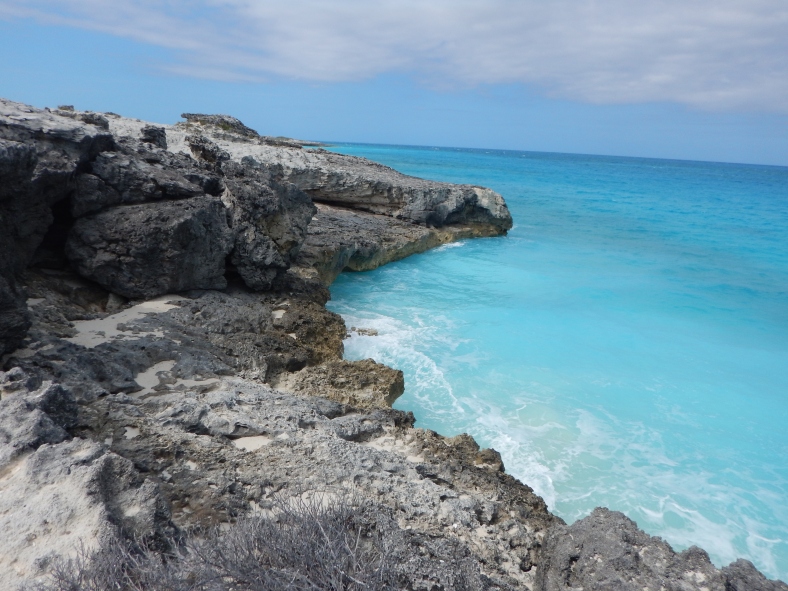 Warderick Wells is a mystical place of no such thing as coincidences.  Christopher and Robin came to our boat for a sundowner.  We had been on their boat before but this was their first time on Echoes.  When Christopher stepped aboard he said, Oh, is this a Catalina MKII 42?  I’ve been on one of these before.  Remember Selah, Robin?  Captain Areyoukiddingme? said, This is Selah!  We bought the boat from someone who only owned the boat a little over a year.  That guy bought the boat from the people of Selah.  They were sailing instructors.  Christopher and Robin did their ASA sailing training living aboard our boat for a week.  They have been good friends with the instructors ever since.  Have you seen the movie, The Red Violin?  It is one of my favorites.  It is the story of a magnificent, soul filled violin and the lives it touched all along its way.  I brought up the movie about a week before and said to John, I’d like to know about Echoes’ story and her people.  It turns out there is quite the story about Selah and her owners, Bob and Ana.  In fact, Ana wrote a book about it.  You can buy the book on Amazon.  Bet you know what I’m reading just as soon as I have enough wifi to download it.

These adventurous sailing instructors had to sell Selah because tragically, Bob was hit by a car and hung on to life by a chafed sheet for quite a while.  I’m pleased to say he is doing much better now.  I was sad to hear the circumstances of selling Selah but am happy to be connected in this unusual way.  Christopher sent their friends an email with our picture and said, The new name is Echoes, which seems very appropriate given the circumstances of our meeting.

The next day Cerulean went on her way south and Soul Divers came in to take Cerulean’s exact mooring.  We had sundowners (well, the sun does set every day!) with Soul Divers and made plans to go snorkeling the following day.

The Eagle Ray gets its name from its beak like snout

Matt and Sadie are both scuba instructors.  It was a blast to snorkel with them as they have a sixth sense to the whereabouts of all living sea creatures within possible eyesight and even those that are not.  We popped in the cold water on a cold day directly off of Echoes.  Within ten minutes we saw eagle rays, sea turtles, a large variety of fish and colorful coral reefs.  Have I mentioned Warderick Wells is a magical place?  We watched four Spotted Eagle Rays swim in circles around our neighbor’s boat.  It was like watching an underwater ballet in graceful timelessness.  But the highlight of the day was Grandpa the Spiny lobster.  Matt noticed a tentacle waving out of a cavern in a reef.  He freedove down and rooted its occupant out of its hiding place.  Out came Grandpa.  I screamed in excitement through my snorkel.  I had absolutely no idea lobsters could get this big.  Everything appears twenty five percent larger under the natural magnification of water.  Grandpa looked like the size of a well fed labrador but Matt guessed him to be a little over three feet in core body and around twenty five pounds.

I will never forget the enchantment Warderick Wells land and sea park.