We moved further south along Eluethera and sailed as pretty as a digitally enhanced picture to Rock Sound harbor.  We left Governor’s Harbour at the same time as our friends on Joy and Cerulean.  All three boats are Catalinas, theirs being our bright, modern, big sister, dream boats.  All of us had full sails out.  They gained a lead on us and faded gently into the horizon.  We threw out a line.  Captain Slipperylure caught a Mackerel but lost him as he tried to land him in the boat.  Remember our dear friend Dick who sailed around the world for ten years and is working towards beating a world record in swimming when he turns ninety?  He follows our blog and sends us emails with extremely helpful information.  He told us the best way to land fish while sailing is, first of all, use a thick leader and then let the fish wear itself out for five or more minutes before trying to get him in the boat.  Then, get this, poor some cheap booze on his head or in his gills as you bring him into the boat.  This knocks him out, kills him and then he doesn’t flop blood, guts, sharp teeth and scales all over you, your cockpit and your bimini cover.  Genius!  Captain Growingimpatient said, Surely it is time for another fish to bite.  Not a minute later he had a strike and using Dick’s advice landed a second and larger Mackerel, Big Mac.  He threw him in our sink until we reached Rock Sound Harbour.

We were using a technique called visual navigation as we headed through some shallow and reefy water into the harbor.   A person stands on the bow and directs the helmsman away from possibly grounding sandy shoals or hull damaging reefs.  I was helming and Captain Sharpeye was on the bow.  We have a vocabulary of hand signals we use while anchoring or navigating as we cannot hear each other and it is not prudent to be running back and forth to talk.  The one up forward simply points in the direction they want the helmsman to steer and then they give a sign that it is clear and ok to go back on course.  We cleared several hazards with no problem.  Then Captain Brilliant spots something and shoots his hand pointing sharply to port.  I turn the boat as quickly as possible and he keeps pointing and pointing.  I turned over ninety degrees as did my insides.  He continued to point as he moved back to communicate with me.  Did you see that butterfly way out here?! he asked.  I replied with something along the lines of, What in darnation, you silly billy!  as I spun us back on course.  I didn’t even get to see the butterfly.  He laughed out an apology.  What a role reversal!  Maybe we are rubbing off on each other.  Captain Goeschasingbutterflies will soon be naming his favorite underwear, Comfy Ken, Athletic Al…it’s your day Fun Frank!  And I will start fixing unbroken things and doing math equations for the simple elegance of it.  …Naw.

As we have been leap frogging our way down the Eleuthera coast we have ran into the same boats and their people.  Everyone is moving with the weather and looking for similar anchorages that are suitable for the conditions.  Sometimes you get familiar with a boat by way of VHF as you ask each other for information or you just happen to be anchored near them or run into them here and there.  Familiarity starts to build and next thing you know you are having sundowners (sunset cocktail hour) with them on the boats.  It is really fun and let me tell you, sailors are awesome human beings.  Rock Sound was a celebration of many of these new favorite people. 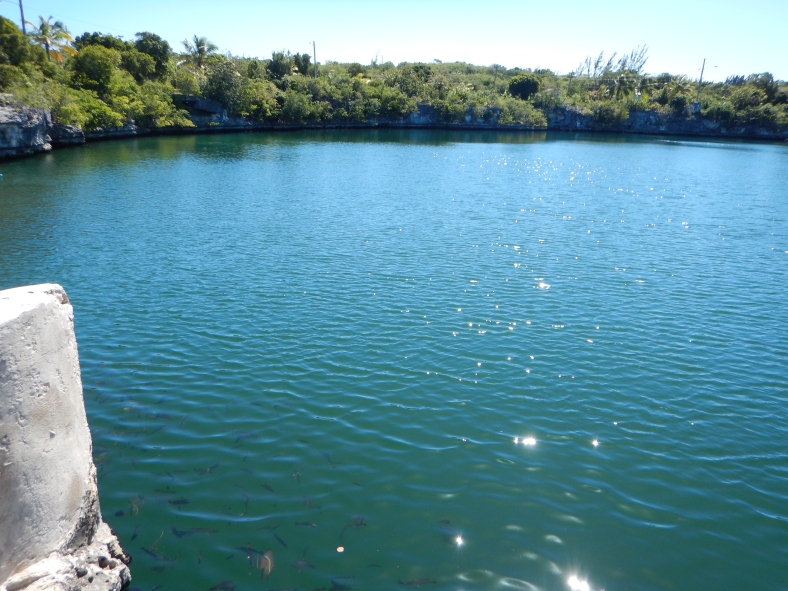 We walked to a strange large source of water in the center of town called the ocean hole.  No one knows what or where the source is that leads the ocean to this hole in the middle of the land.  Many locals jump off the cliffs here and feed the large quantity of fish.  Some will not go in the water because they do not know where the water comes from and are afraid of dark, mythical creatures lurking at the bottom or of being sucked through its mystery never to return.

It was here that we met Lawrence and Sue from England.  It was Sue’s birthday and a perfect excuse to stop at a pub for a beer.  You are used to my wandering stories by now so let me switch gears on you.  Our boat, Echoes, was named after a Pink Floyd song that we listened to as a family whenever we sailed….laying on the deck, looking up at the stars.  It is a long song about the ocean, whales and about being a decent human.  It is an obscure song off of a somewhat obscure album.  Captain Itsonlyfunnytohim always says when asked our boat name, Echoes, like the Pink Floyd song.  To John’s great pleasure, it bugs me.  I say, John, that nice Bahamian woman over half your age has no idea who Pink Floyd is and the chance of her knowing the song Echoes is one in ten billion.  Pink Floyd fans don’t know that song.  Just say Echoes!   So, of course, he says it every single time and smirks at me sideways while he says it.  Okay, we’re back in the pub now.  So Birthday Sue said, What is the name of your boat?  And Captain Nevertiresofteasing said, Echoes, like the Pink Floyd song.  And Lawrence said,  Right, the last song on the album Meddle.  Wow!  This was a first.  After we sung the lengthy praises of Pink Floyd they, not me, they brought up Neil Young.  Say.  No.  More.  We had dinner plans with our Catalina friends on Joy and Cerulean.  Our new friends from Pentesilea joined us, too.

Dinner was a fun and delicious.  Captain Inhiscups repeated practically word for word, with the help of Christopher from Cerulean, all of the lines from Monty Python’s Holy Grail and then The Life of Brian.  Cerulean’s Robin pre ordered us an apple pie and it tasted like childhood.  I didn’t realize until the next day I wasn’t charged for it.  Generosity is rampant.  Robin has written a cruising guide on the Bahamas which she gives away for free.  I pour over it every time we head to a new destination.  I picked her brain on the Exumas and other sailorly mysteries.  Joy’s Diana and John gladly accepted a dinghy ride from the others rather than returning to Joy in Tip Sea with tipsy.