We had been on the hook for eleven nights.  I cut us extremely short in my earlier post about water usage.  We pulled into the marina on the twelfth day with over an eighth of our water left.  As Captain Hardlymodest says, You learn to really not care if another sailor decides to watch you wash your ass crack.  We soap up and bathe in the sea water and use a transom shower head to rinse off with fresh water.  Clean is clean.

Our sail over from Soldier Cay was glorious.  We trolled a line with Captain Supersticious’ favorite daisy chain.  He had a nice size Wahoo on the line that he wrestled with for ten minutes but the fish got away.  He gave us a good jumping show before he got off the hook.  It is hard to catch a fish trolling on a sailboat under full sail because it is difficult to slow down and maneuver the boat conducive to landing a big fish.  Also, you have to deploy the swim ladder to attempt to get the fish on board.  Not too much later, we lost the end of the daisy chain, hook and all, on another hit.

We sailed around the most northern point of the Berry Islands and past a cruise ship.  Echoes really enjoyed herself as the wind hit her on a beam reach and she seemed to fly along.  We reviewed the charts and cruising guides regarding our entrance to the marina and directions to fuel dock.  The guide said the fuel dock was one of the more difficult to land.  The Kraken stirred.  A large tentacle popped out of the water with its middle suction cup waving at me. 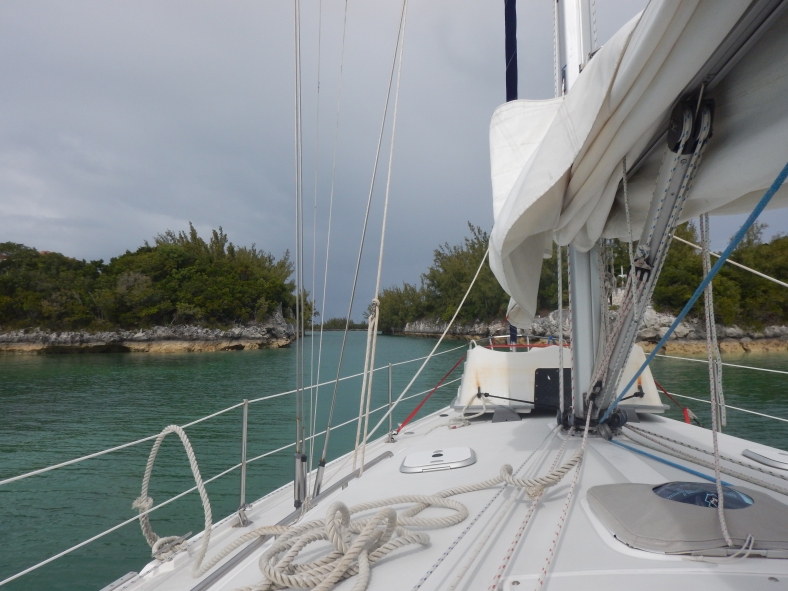 We squeaked through a beautiful, narrow, coral cut channel to enter a safe and calm harbor.  The fuel dock was merely a few pilings and short dock surrounded by jagged coral and shallow shoals.  We skulled around a few times studying it and Captain Threadtheneedlelikeaman eased her right in.  Kraken be damned.  Next we zig zagged further into our marina and slip.  Like.  A.  Boss.  We were tied up and Echoes was as calm and serene as I am after two glasses of wine.  No more roly poly after eleven nights of it.  Internet!  Cell coverage!  Laundry!  Restaurants!  LONG, HOT, PRIVATE SHOWERS! 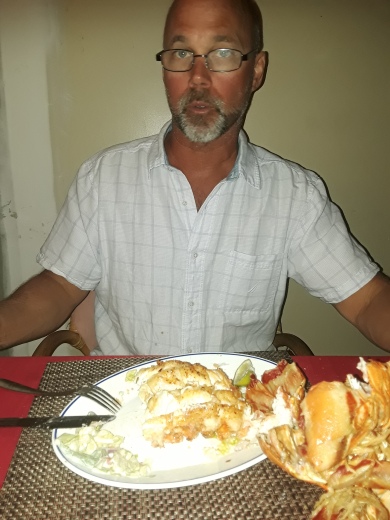 The very friendly Great Harbor Cay Marina service went above and beyond.  The dock master, Steve, gave us a lift to a recommended local flavor restaurant.  The owner and chef was at a wooden stand on the beach taking his frustrations out on some conch.  He said he wouldn’t be in the kitchen for another hour.  So Steve drove us all around the island on  back roads giving us the history of Great Harbor.  He showed us an old, falling apart stone hotel that the rat pack frequented and many movie stars used to visit.  We spent the evening with Steve at the Until Then restaurant feasting on conch and lobster.  The after picture is what Captain Fullofit could not finish.  We had diced lobster and scrambled eggs the following day at the chef’s suggestion. 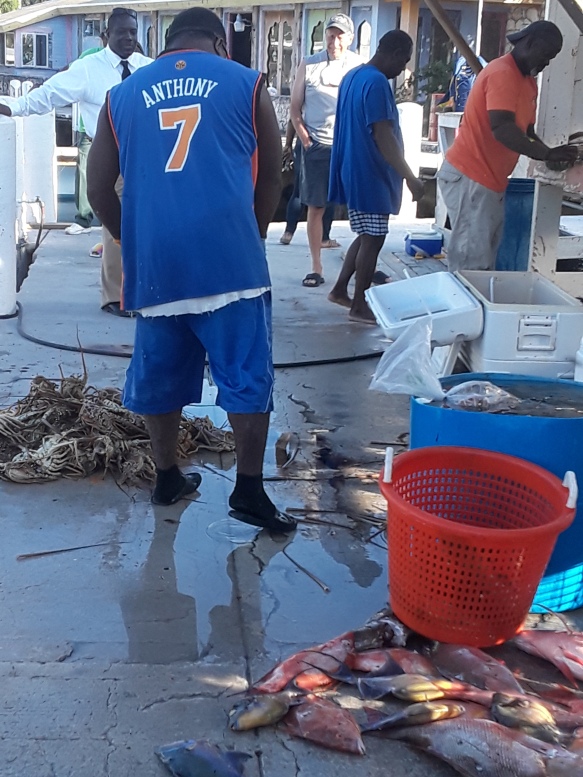 We did laundry and two weeks worth of bills, business and email correspondence.  I soaked up our boys and loved ones’ voices on Valentine’s calls.  We ventured down the dock to watch the fisherman come in with their catch.  It was glorious.  They spend about three or four hours fishing, spear fishing and collecting traps and then another four hours cleaning the fish with the help of several other men.  Captain Doinghisresearchthingaboutcatchingfish spent a lot of time picking the exceedingly friendly fishermen’s’ brains. 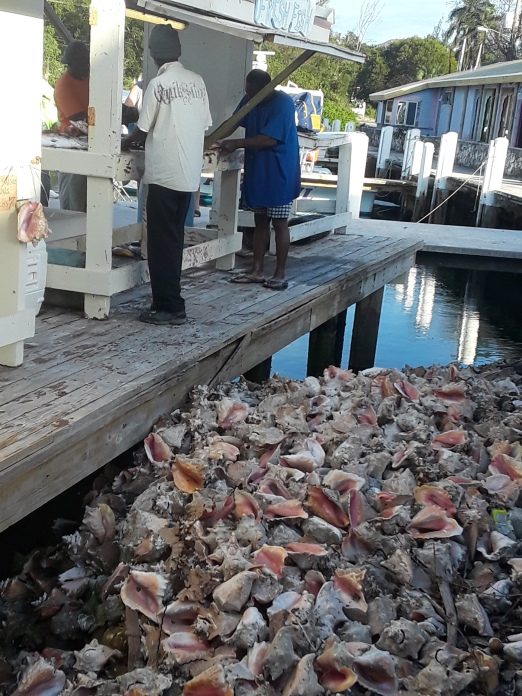 We bought a gallon ziplock bag stuffed full of trigger fish for $25.00.  It was delicious.  The following morning the fisherman stopped by our boat to ask Captain Thejokeswerenotoldtothem if he wanted to join them on their morning catch.  We were busy preparing to leave but Captain Shouldhave regretted his choice.

Trigger fish or Turbot as the locals call it

Today we scoured the boat inside and out and massively provisioned (the wine bank is full) for another long stretch of wet wilderness.  We plan to go to Eleuthera, via a night on the southern tip of the Abacos, to spend about a week cruising south on Eleuthera and then over to the Exumas, our ultimate destination. 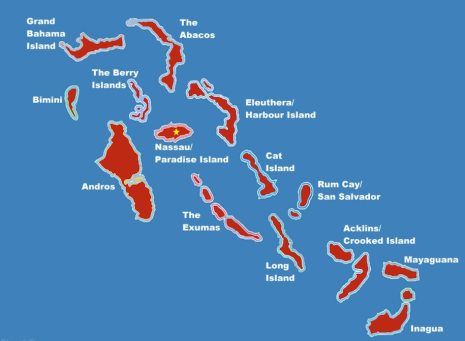 It will most likely be a long silence (you’re welcome) and then a bombardment of blogs again.  Thank you for your enthusiasm, comments, likes, texts and emails.  I read, enjoy and appreciate every one.  Feel free to ask me questions and I will answer the best I can or at least make something up.  Until then, I wish you fair winds and following seas.