We left The Dry Tortugas unexpectedly to avoid any possibility of heavy weather. Can you imagine blasting through enormous waves in inclement weather non stop for twenty four hours?  No thank you.  One of us wanted to wait until the following day  because it was only 32 miles more than crossing Lake Michigan and the higher the seas the better to learn from.   One of us made a suggestion of where the other one could put his “experience” lecture.  Best to play it safe and cheaper to remain married. 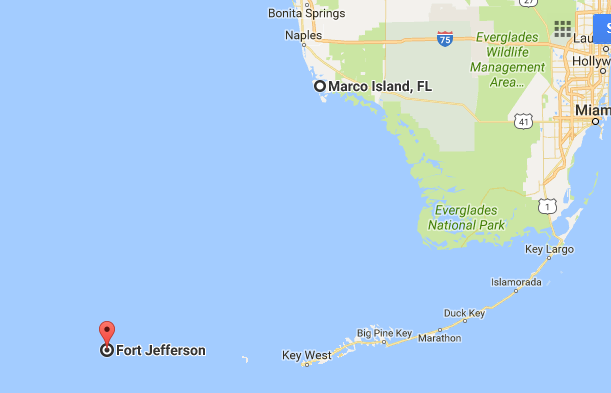 Had we known we were leaving that day we would have done several things a little differently.  For instance, we would have dialed it in the night before and we wouldn’t have swam and hiked most of the day.  We were tired at the start.  However, adrenaline can be your friend.  The seas were calm and the wind was tame.  It made for slow but peaceful sailing.  When we could only reach three knots we motor sailed.  We watched a beautiful sun set together and then began four hour shifts. 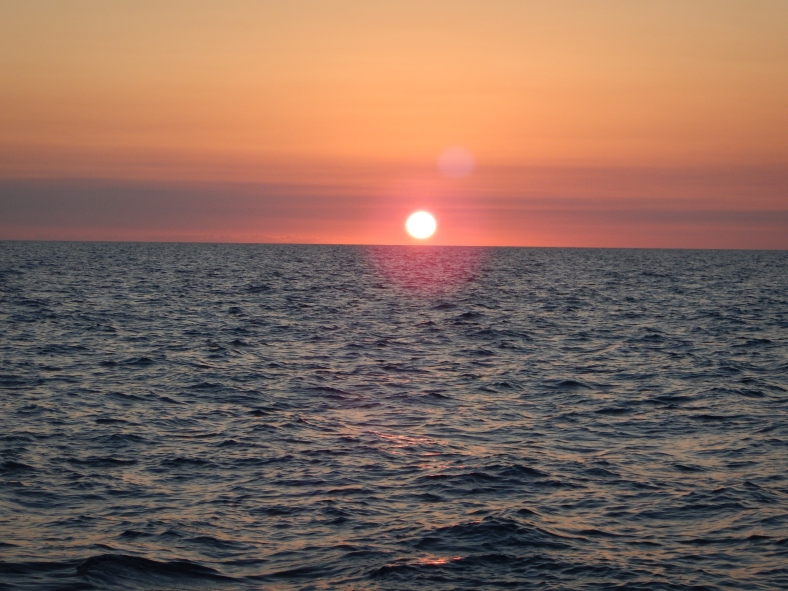 John did the first shift and I set my alarm for midnight.  The winds picked up around midnight so we set both sails and killed the engine for my shift.  John thoughtfully bought me a placard that identifies what certain lights on boats mean.  For example, a commercial fishing vessel has certain light patterns they put on that are different from a sailboat sailing at night.  This way we all can tell who each other is out there, which way they are heading and who has the right of  way.  Sailboats sailing at night, like us, identify themselves by sailing with their anchor light on.  This gives us the right away to any non emergency craft because a sail boat under sail has less ability to change course.  Too bad our anchor light still didn’t work.  John said not to worry.  Just avoid all boats and problem solved.  I studied my placard and had it by me as it is most important to recognize and avoid commercial fishing vessels.  Grouper fisherman drag a three mile line with hooks and bait set every thirty feet or so.  Shrimp boats’ nets can be two miles long.  We had over a hundred feet under us so we didn’t have to worry about grounding.  There were occasional weather towers out there in the middle of no where, some lit, some not, but all were marked on our charts.  It was these and boats I was watching for.

There is something soul stirring about the sea, the sails, the stars and the solitude.  I felt like my reset button had been hit and I was rebooting.  In this new space I could choose to quiet my normally buzzing brain.  All of the endless chatter, much of which you have been privy to, stopped.  I felt in the company of silent, unseen angels.  So this was peace.  I liked it very much and sailed in its magical and magnificent presence.

And then I saw a weird bright light.  It was among two others I could identify on the charts as weather towers but the third wasn’t on the chart and didn’t match anything on my placard.  It was super bright and I, for the life of me, couldn’t tell if it was twenty yards away or five miles away.  I tried the radar to identify its distance but could not get it to work.  I changed course and it seemed to change with me.  I began to worry that I might run right into it.   John told me not to hesitate to wake him for any reason so I prepared to go below and wake him up.  I set my course between the two fixed lights I knew were towers and away from mystery light.  I put the boat on autopilot, slowed way down and went below to get John.  Boy was I surprised when I returned to the cock pit and all three of the lights were gone.  I had set our point of sail off course to slow us down but we slowed so much that the GPS in the autopilot could not find us and turned off.  I got the boat and sails back under control and on course as John came up.  We debated long and hard on the source of the light.  John messed with the radar and again, like in the fog, it failed us.  Apparently it only works during the day when you don’t need it.  In the end, the boat turned out to be a shrimp boat.  So much for my placard.  You couldn’t see the red, green and white patterns.  It was a football field size glowing bright light traveling willy nilly all over the sea.

It was John’s turn to take over.  He, too, had a soul inspiring experience.   He loved watching the sun set over the ocean and then watching it rise again. 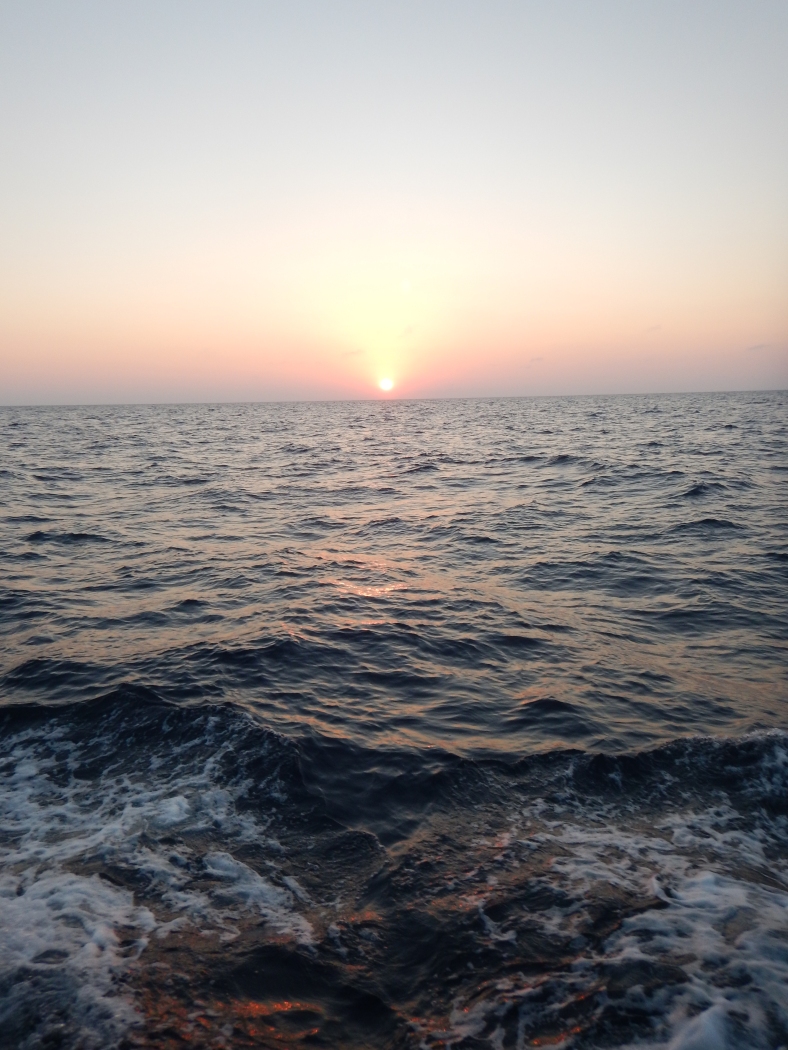 He had visitors.  There was Dolfonzo the dolphin and his family who would dart through the steaming light reflection in the sea.   There was Felix the fearless flying fish who made an untimely landing. 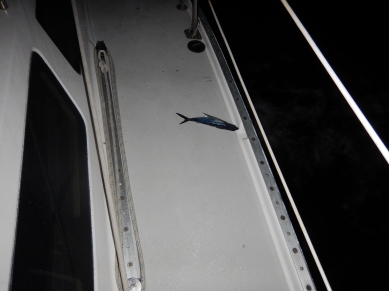 John motored most of his shift.  We finally saw land in the early afternoon and the wind picked up.  We set sail again slowing us down but it was a great way to end the trip. 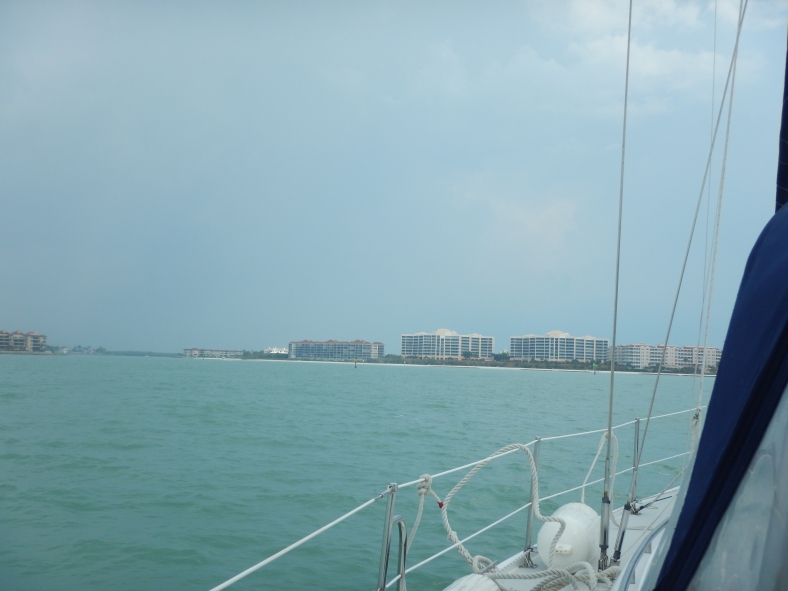 We waved to my folks and tucked in to our dock minutes before a thunder storm. 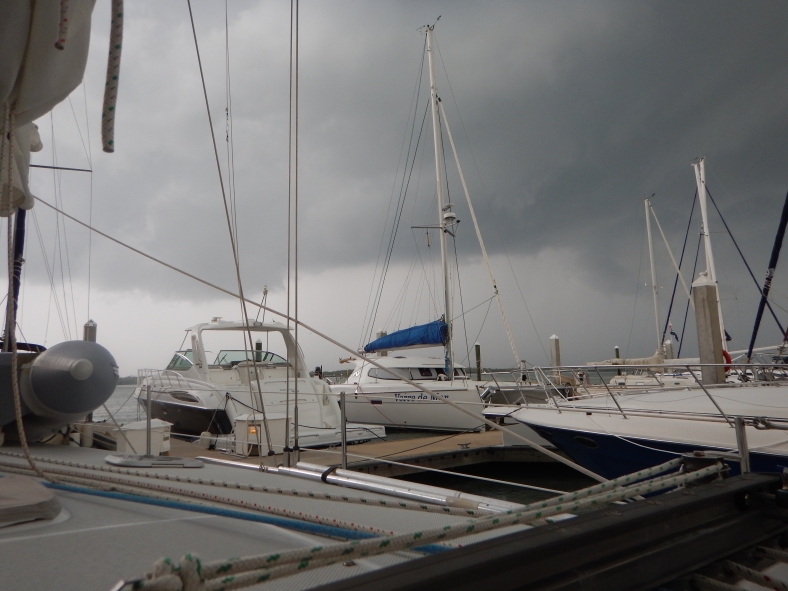 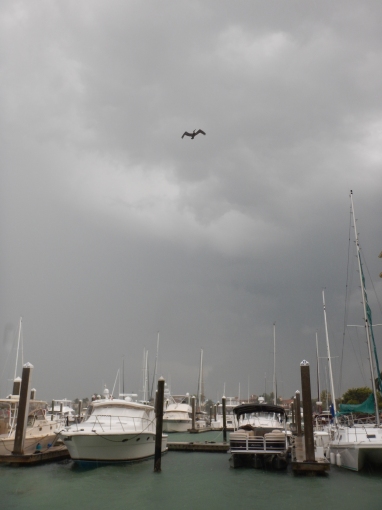 What an adventure we have had these last several months.  How grateful we are for the “experience.”  After securing ourselves to our dock I opened a small bottle of sparkling wine to end the adventure like we had begun it. 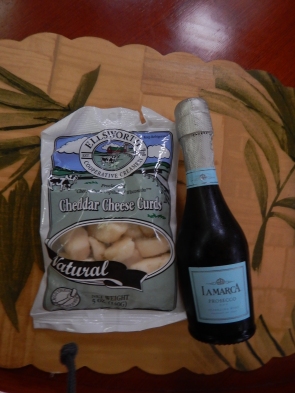 I poured a little bubbly into the sea and thanked Neptune, Poseiden and the four wind brothers.

Thank you, oh great gods of sea, for our safe passage and for your generosity.

And thank you for following along with us.

Until the next adventure…. 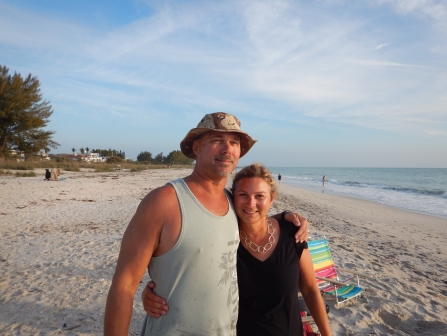