With new found respect we waited out a second day of small craft advisory tied snugly to our dock.  We decided to head out the following day with strong winds predicted but not the nail biters.  Once again, we waved farewell at my folks who waved back a little tentatively.  All was well but we were cautious knowing the trek out to sea around the shoals can change one from smug to schmuck very quickly.  The winds again were almost straight on which makes for difficult sailing.  We sailed a while and then motored as we had a very long day ahead of us. 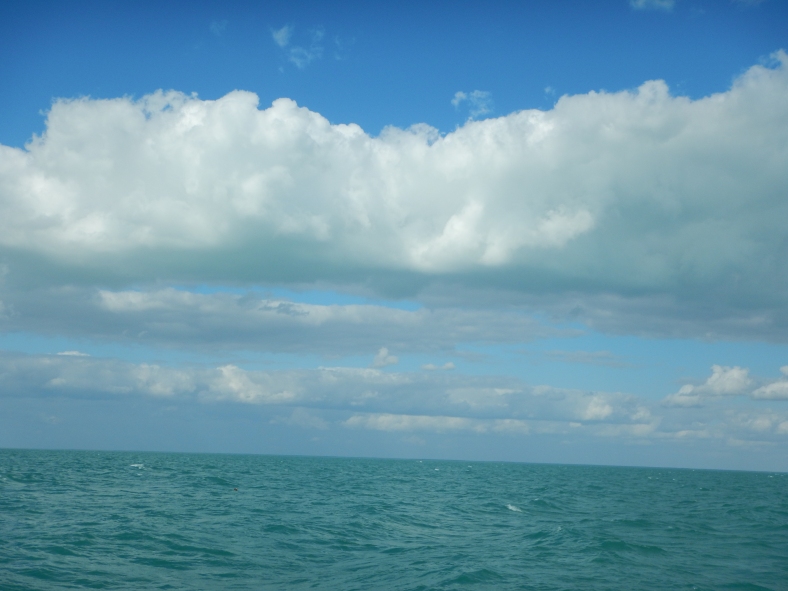 The seas became choppy so it made for a somewhat uncomfortable and slow passage.  It was about thirteen hours at sea so the next day my pony keg abs and neck that holds up my big brain bobble head were stiff from the buck boarding.  I tried to capture the rise and fall of the boat in picture.  When you drop down from a wave the boat crashes into the water and sprays up and occasionally at you. 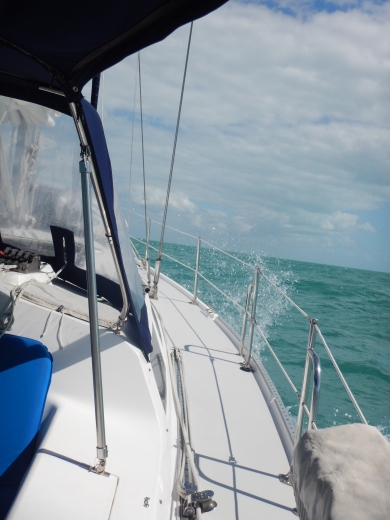 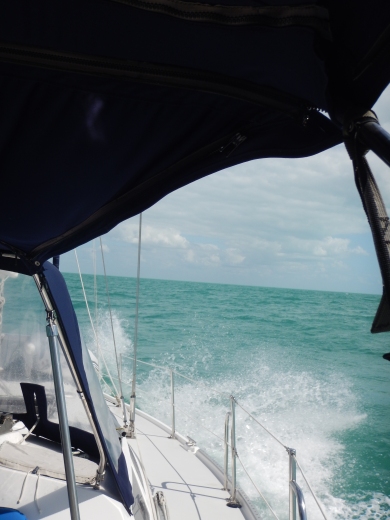 I will not complain any more about the day because the sun was out and we were in control of our vessel and ourselves.  What do you do for thirteen hours at sea?  I watch for birds and sea creatures.  Dolphins never fail to set my heart fluttering.  Sometimes they will come up directly to the boat and ride the wake.  Wonderfully, on rare occasions, crab pots turn into sea turtles.  Their heads look very similar.  There are five different sea turtle species in these waters.  Sea turtles are shy and dive deep once they spot you so they are hard to differentiate or capture on camera.  I saw one whose head was the size of a basketball.   Leatherbacks can weigh up to 2000 pounds and get to 6.5′ in length.  Basketball head was a huge turtle and a huge thrill.  I named him Shaq.  I also watch the patterns in the water and I play I spy with the clouds.  I even made up stories about the cloud shapes in the vast amusement park of my mind.  John studied manuals and fixed things. 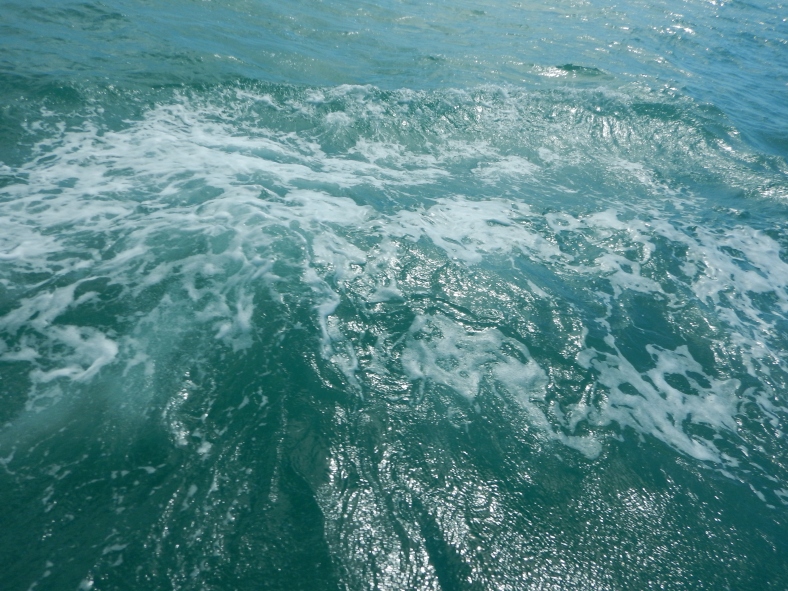 The sun set as we were still making way. 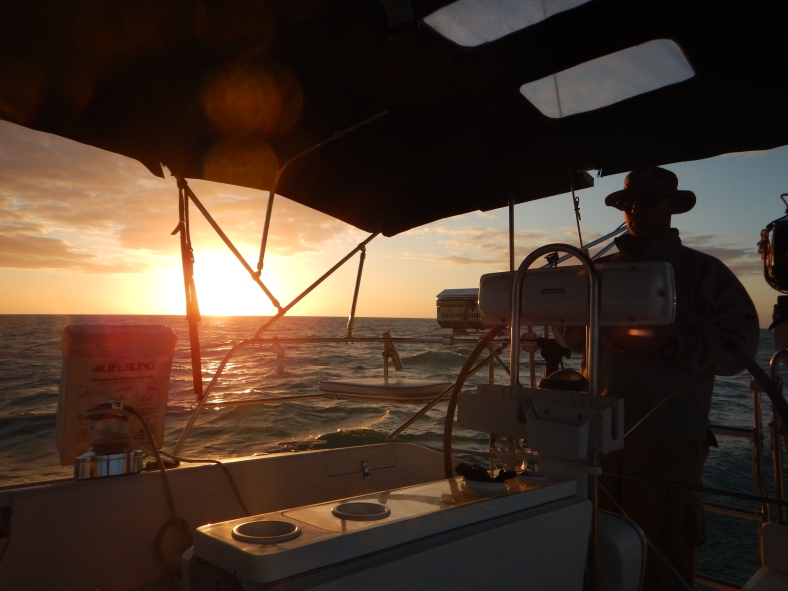 We arrived at the Shark River in the middle of the Everglades.  It is beautiful in the daytime and there is not sign of human life for many miles.  We got to our anchorage in the dark.  Boats do not have headlights.  You rely on your navigation equipment, dumb luck and a spot light we turn on sporadically to check for things we can see above the water that would make a dent.  Anchoring blind set off my need wine now warning light.  It was another notch in Captain John’s “experience” cap and we were successful.  We celebrated with rib eyes and Syrah for a late night dinner.

How about a cloud story?

Swordfish cloud was a bully.  He flew around poking and stabbing at the other clouds with his sword.  Santa Clause cloud said, Swordy, knock it off or there will be no bright, shiny scales for you next Christmas.  But Swordy didn’t listen and continued to poke.  Santa Clause told Swordy firmly, You know that your sword is to be used only in defense or to stab prey.  This is your last warning.  Stop stabbing other clouds.  But Swordy did not listen and poked at poor poodle cloud.  Just as Santa Clause cloud began to fade away, Swordy’s sword started to break apart and fade as well.  Santy Clause!  Santy Clause!  I promise I’ll stop! yelled Swordy.  But it was too late.  Santa was off policing other bully clouds elsewhere.  Now Swordy was just fish cloud.  He cried wispy tears.

(This is not actually a picture of Swordy but is of his less attractive cousin Gordy.) 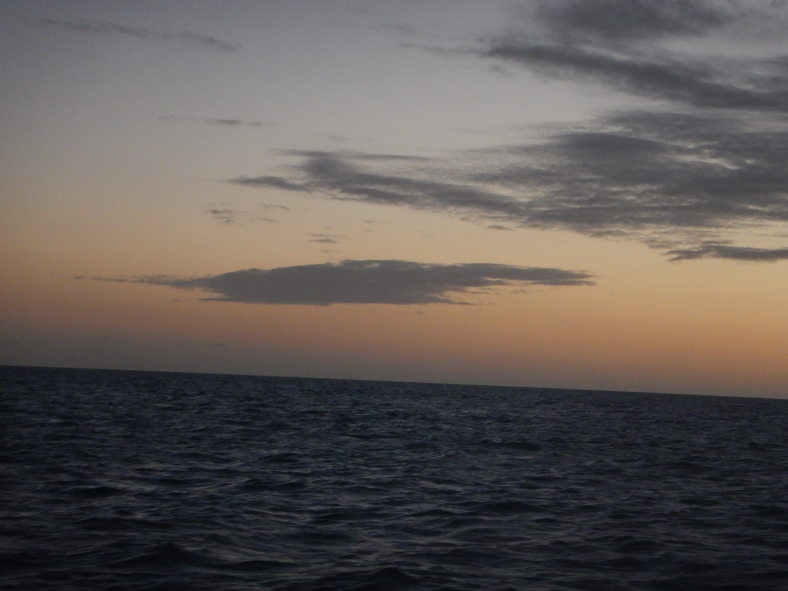