We spent two nights, Feb 1st and 2nd,  anchored just off the private island of Useppa and a short dinghy ride to Cabbage Key.  Both Islands are only accessible by boat.  After several phone calls we received the required permission and registration to enter the upscale Useppa Island to go to a museum.  It was a great audio guided tour of island history since the ice age.  There is a staggering amount of crazy information including how Useppa played a big part in the Bay of the Pigs.  The original Calusa Indians, known as the shell Indians, lived peacefully on these islands until a variety of cultures came and screwed it up for them.  They buried their dead under huge shell mounds and these are still visible today on several islands.  The Island got its name from a Spanish Princess that was captured and held hostage by a pirate who didn’t take kindly to her rejection of his affections.  Of course my imagination goes to Johnny Depp and Captain Jack Sparrow and I don’t feel at all sorry for her being held on a beautiful island occasionally bothered by a handsome pirate.

There is over $50,000 worth of dollar bills on the walls in this Cabbage Key restaurant.

Our favorite part of this anchorage was gained from the ever important local knowledge of bartenders.  Drinking has a wide variety of advantages.   We took our dinghy several miles through and around mangroves to the elusive “tunnel of love.”  There is a narrow tunnel in a mangrove just wide enough for the dinghy and partly too shallow for even that.  We would walk and drag the dinghy at those points.  After many twists and turns we ended up on a long, beautiful and natural beach on the gulf.  We saw all kinds of birds and fish along the way, but no alligators.  This type of exploring is called gunkholing. 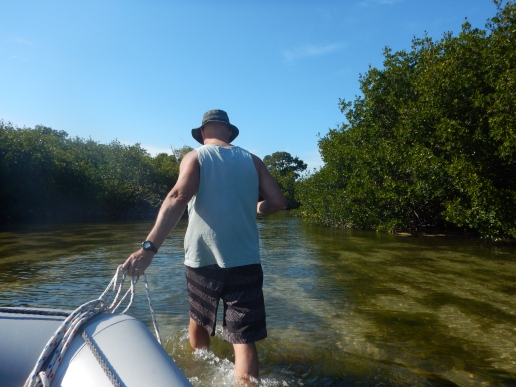 We met a great couple, Tom and Jennifer, anchored next to us from Red Lodge, Montana.  Red Lodge is one of our favorite motorcycling and camping stops so we know the town well.  They, too, were pretty new at sailing and cruising and we had fun sharing woopsie stories over a few cocktails.  We headed off in different directions but hope to run into them again. 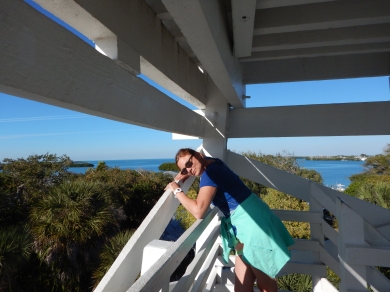